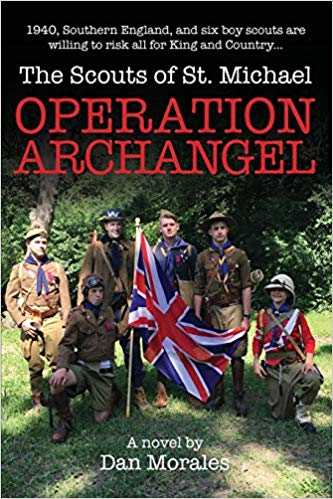 Dan Morales’ debut novel, Operation Archangel: The Scouts of St. Michael, is a thrilling adventure of how six orphaned boys in 1940s ravaged Britain dared to make a difference.

Hitler looms over Britain in 1940. The ravages of war are relentlessly closing in. At St. Michael’s Church and Home for Boys, there are six young boys determined to make their mark to quash the Germans. All they ever wanted was to belong. When they are denied the privilege of becoming official members of the Ronan Academy Boy Scout Troop, they elect to start their own chapter. With the assistance of Sisters Noreen and Doreen, they manage to create their take on ‘official’ uniforms from random materials on hand.

Freddie and Reggie were fifteen and sixteen, the oldest of the six boys. Henry and Dougie fell next in line at fourteen. Bringing up the rear were Jack and Willy at the tender age of twelve. The only home any of the boys ever knew was St. Michael’s Church and Home for Boys, located in The Moor, one of the oldest sections of the village of Hawkhurst. The town folk didn’t care for the boys and they were often referred to as the “Hawkhurst Gang”—a gang that was an infamous group of smugglers, highwaymen and cutthroats who made the village infamous during the mid-eighteenth century. In due time, the boys would shine in a light they never expected to experience. During an air raid, they man an anti-aircraft gun and manage to shoot down a German dive-bomber and capture its pilot. When their bravado draws the attention of the King, they are presented with medals. However, the recognition doesn’t stop there. It would seem British Intelligence has greater plans and intends to recruit the boys for an extremely dangerous undercover mission. It will take them far from the comforts of St. Michaels and into the throes and evil of Nazi Germany.

Dan Morales doesn’t disappoint with plot and premise in his debut novel. He has developed believable characters in the six boys who are the centerpiece to the story. Further credibility is infused with the characters of the Sisters of St. Michael’s. Morales doesn’t belabor the storyline by focusing on the fact his main characters are orphans. Rather, he paints a picture of survivability and defiance in each of the young lads that manages to show the reader how each of them has risen above the short deck they were dealt. There is an established voice at the onset of this story which is key to penning a great tale and it manages to grasp the interest of his audience from beginning and anchors interest throughout the story. However, poor editing was one item that was consistent throughout this read. There are several instances where words are duplicated and/or used out of context. This became somewhat of a distraction for me throughout the read and I would encourage Mr. Morales to revisit and correct. Aside from this, Operation Archangel: The Scouts of St. Michael is a solid story peppered with ample moments of terrific entertainment.

Quill says: Operation Archangel: The Scouts of St. Michael is an entertaining read that focuses on the premise of great accomplishment when conviction and commitment is the goal.

For more information on Operation Archangel: The Scouts of St. Michael, please visit the book's website at: thescoutsofstmichael.com