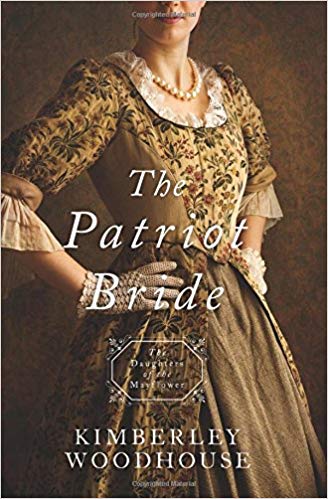 Kimberley Woodhouse’s historical fiction work, The Patriot Bride, is an enjoyable read and the fourth book in the Daughters of the Mayflower series.

It is September 22, 1774 and Matthew Weber is hidden in the corner of Charles Thomson’s study. He is full of trepidation as he waits for Ben Franklin’s arrival. There is considerable unrest and uncertainty in the Colonies as the threat of war looms. Lines have been clearly drawn in the sand. One is either loyal to King George (a Loyalist) or a traitor to Britain and therefore, a Patriot for the independence of the Colonies. Matthew cannot let on he is posing as a Loyalist; yet he is a true Patriot at heart. He is a spy and holds the coveted position of being privy to information on both sides of the imminent conflict.

Faith Jackson is a wealthy widow and a friend to George and Martha Washington. Her relationship goes deeper than friendship. Faith lost her parents when she was a young girl and George and Martha were there to be surrogate parents to her. Faith is an ardent supporter of the Patriot Cause.

There is a message that needs to get to a spy among the Loyalists and Faith steps up to be the one to stand for God and Country to deliver the message. Her task is to deliver the message to Matthew Weber. Upon meeting Matthew, Faith realizes there may be room in her life to love again. Unfortunately, the challenge, nuisance and persistence of one Anthony Jameson and his intentions toward Faith could be the unraveling of a potential future Matthew and Faith could have. Indeed, the future is uncertain and sacrifices for their Country will dictate what future, if any, is intended for the two.

Kimberly Woodhouse demonstrates an admirable achievement with her contribution to this interesting series. Her historical infusion complements the timeline (and period) with terrific accuracy and at the same time breathes life and personality into the likes of both Benjamin Franklin and George Washington. I’ve had the pleasure of reading previous books in this series. What is remarkable is that each author (Ms. Woodhouse included) has managed a cohesive collaboration to tie the historical timelines together; yet each body of work can stand alone. I am a fan of historical fiction and admire a writer who can blend fact with fiction and deliver a story that enables a reader to learn something while connecting with the characters. Ms. Woodhouse has mastered this premise. Congratulations on The Patriot Bride. It’s a great addition to this series and I look forward to the next installation.

Quill says: The Patriot Bride is a wonderful reflection (and account) of the willing and unrequited sacrifices made by our forefathers for the price of freedom.