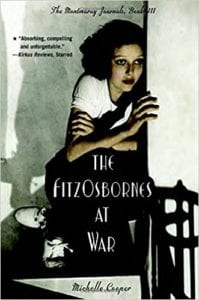 Readers have been following Sophie FitzOsborne and the royal family of Montmaray for a while now. From dealing with their strange yet luxurious beginnings to living in exile, readers are now offered the fantastic conclusion of the series. World War II has been declared and the exiled FitzOsborne family are in the midst of it all. You see, the FitzOsborne’s Island Kingdom of Montmaray was captured by the Nazis and they have been living in London ever since. The children were just teens at the start of the war, but have to grow up very quickly once the Germans start bombing Britain.

Simon and King Toby are in the Royal Air Force; Princess Veronica does something ‘secret’ in the Foreign Office; and Princess Sophie works in the Food Ministry, where she gives out information regarding rationing. It is Princess Sophie’s journal that these books are taken from, and she relates a detailed picture of life during wartime, with all it’s horrors, heartbreak and fear. From the time of blackouts to the Blitz - reality is offered on every page. Readers can almost see Sophie dancing in nightclubs with soldiers on leave, while filling her heart with hope that her brother, Toby, has survived having his plane shot down over enemy territory. She also finds a way to fall in love during a time of pure and utter isolation.

Included in the story are truly well-known figures of that time period, including Prime Minister Winston Churchill, the Kennedy family and several others. As the author writes about the history of WWII, she does it so well that it actually becomes personal for each reader; Sophie’s images will have readers completely caught up in the hideousness and, finally, the triumph of a time that will never be forgotten.

Quill Says: This isn’t frilly or sweet, just completely fantastic. Be ready for the truth but, most of all, be willing to listen.