The Eyes of Gehazi 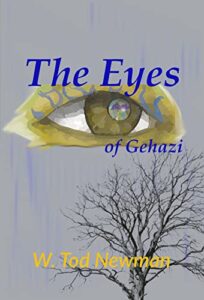 The Eyes of Gehazi

Gehazi’s journey starts many thousands of years ago in the Northern Kingdom of Israel. He and his family are part of the Tribe of Manasseh, one of the many tribes that live near and benefited a lot from the Jordan River. He recalls his life as one below poverty, working endlessly day in and day out, but never getting enough. The things that kept them going were the trivialities of their lives, being content despite having very little, and most importantly, their belief in their God.

Growing up, Gehazi was like any other teenager in their small village, but Eli, one of his closest friends, was not. Gehazi and Eli worked as farmers and were always proud of their honest work. Eli stood out not only because of his physique, but also because of his work ethic. Whereas other boys his age would be skinny and short, Eli had a tougher and taller build. This fact did not make the protagonist in the slightest bit jealous; in fact, Gehazi was inspired to be working side-by-side with Eli all the time. However, there was something inside him, a whisper getting louder and louder every day, that told him he might not be as popular as his friend, but he was meant for greater things.

One day, Eli came to Gehazi to reveal his purpose. He told Gehazi that his father Elijah, a renowned prophet, asked him to follow him on his journey and that soon, he would probably take up his mantle. He asked Gehazi to come with him, leave the farm, and live a prophet’s life. Needless to say, this was puzzling for Gehazi in the beginning. But realizing that his purpose, like Eli’s, was starting to get clearer, he decided to follow his friend in this arduous path.

Newman’s The Eyes of Gehazi is a slowly unfolding read that gets both interesting and tiresome, depending on where you are in the book. It has a personal and conversational tone which captures the narrative’s intent perfectly. The worldbuilding took some time to set in, but in that stretch, Newman made everything so vivid and appealing to the senses. Readers would also find that Gehazi’s story is full of surprises and life lessons. Whether you are a believer of God or not, the morals still hold true. The Eyes of Gehazi is a wonderful reminder that a purpose-filled life is not easy. One must have an excessive amount of patience and dedication to the life one has chosen to live. Also, there might even be times when it’s too late to appreciate the blessings in life because everything can be taken away in a snap.

The book’s formatting is a bit tricky, though. Some words, when they’re about to go beyond the right margin, are cut off weirdly. The dialogues also do not have quotation marks, which made the reading experience difficult. With regards to the storytelling, the plot twist came as a shock and the ending feels rushed. If this was the intention, then everything’s good. But if not, giving the readers more time for the falling action and resolution would be a good point for improvement.

Quill says: The Eyes of Gehazi felt like reading the Bible. It might not be for everyone, but those who would choose to read it would find themselves in an eye-opening adventure.

For more information on The Eyes of Gehazi, please visit the author's website at: www.todnewman.com