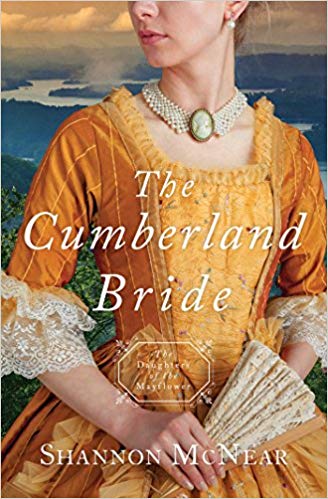 A journey to the frontier wilderness of Kentucky is the theme of Shannon McNear’s latest novel, The Cumberland Bride.

The year is 1794 and Kate Gruener’s father prepares his family for their move to the western reaches of the Kentucky frontier. While change isn’t something to approach lightly, young Kate Gruener is hopeful. She has a love for writing and the prospect of documenting her real-life adventure across the wilderness on the pages of her journal is something she willingly embraces. She is eager to get started and welcomes the challenge. She likens her experience to that of her father’s during his participation in the War for Independence.

Thomas Bledsoe is a true frontiersman. He worked for the pony express delivering packages and mail to varied communities cropping up throughout the New World. At a young age, he was captured by the Shawnee and adopted as one of their own. Years later, he left the nation and returned to his white family. The skills he learned as a scout during his years of captivity would be skills set to good use once his job at the Pony Express ended. Commissioned by the Gruener family, Thomas was hired to be their scout to guide them safely through the uncharted wilderness to Kentucky. When the day arrives for the Gruener family to set out on their journey, Kate is intrigued by the likes of Thomas Bledsoe. She has a sense there is something much deeper to this man than scouting and if anyone could get to the bottom of such a notion, it was Kate. The threat of Indians, perilous terrain, conflict, and maybe even a little romance weren’t the only challenges that lie ahead for the group as they marked the trail to their new life.

Shannon McNear delivers an engaging tale of hardship and history in The Cumberland Bride. It is clear she has done her historical research and the story flows beautifully with the overlay of her descriptive prose of the scenery. She uses language that is specific to the era in describing things such as the ‘necessary’ as the word for 'restroom,' which anchors her audience in the time period. If I had to focus on one item that made this body of work so engaging, it would be the natural flow from one page to the next as well as chapter to chapter. There is a momentum that builds throughout the story that lacks predictability. Ms. McNear establishes voice and tone from the onset and has done an admirable job in her development of rich characters. I have read several of the books in the Daughters of the Mayflower series and have to say Ms. McNear’s addition is a terrific add to the series. I am a fan and look forward to the next book in this collection.

Quill says: The Cumberland Bride is a lofty tale of adventure as much as an account of the hardships endured by our forefathers in settling this ‘New World.’