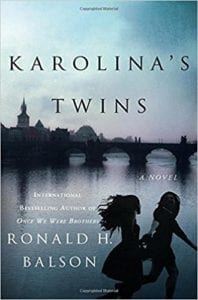 World War II ran from 1939 to 1945 and was the major historical event in the 20th century. The Nazis used it as a cover to hide the genocide of six million people. There is extensive literature on the Holocaust, both fiction and non-fiction. Karolina's Twins is classified as fiction, but what makes it unusual is the way it runs on two levels. The fictional plot is on the top level and the bottom level is the story of a real Holocaust survivor.

The protagonist is Lena Woodward, an elderly Holocaust survivor who grew up in Poland before the War. She and her husband eventually emigrated to the United States where they became wealthy. After his death and before her own, she wants to find out what happened to twin girls who were lost during the War. She hires the Taggarts to find them. Catherine Lockhart-Taggart is a lawyer and her husband, Liam Taggart, is a private investigator.

To explain her quest for the twins, she tells her story to Catherine. This gripping tale breathes reality and was inspired by the life of Fay Scharf Waldman. Episode by episode, Lena describes what happened to her and how she survived. She begins by remembering her happy family life before the German invasion of Poland and her close friendship with Karolina. When the German army moved in, the hungry times began and most of the Jews were forced to cram themselves into a small ghetto on the edge of town. Unwanted children and old people were soon shipped out to unknown destinations. When Lena's family is arrested, she escapes by hiding in the attic of their home. When it is taken over by a German family, she leaves, sneaks into the ghetto where someone tells her the Germans have killed her father, mother, and disabled brother.

Lena is lucky enough to get a job in the Shop, where skilled women sewed uniform coats for the Germans. The manager, David Woodward, is Jewish and attracted to Lena. He recruits her as a courier for the Polish underground and rewards her with extra food. When Lena finds Karolina also working in the Shop, they decide to live together. To get clean water, they have to sneak outside the ghetto. Karolina's lover is a German soldier and he sometimes steals food and fuel for them. They are young, healthy, and strong enough to survive semi-starvation, living in the disease ridden ghetto, and working long hours under miserable conditions.

Before the Shop is closed, David is sent somewhere by the Germans and Karolina's soldier is transferred to the Russian front. Lena and Karolina are sent to another work camp where there will be no way to hide their babies. On the journey, they abandon the twins to save their lives and Karolina is shot. Lena is eventually sent to Auschwitz. Towards the end of the War, the Germans close Auschwitz down and Lena manages to escape from the death march of the few surviving workers. She returns to her hometown where she meets and marries David. Jews are no longer welcome there so they leave and eventually reach the United States.

While Lena is telling her story, her son begins legal action to gain control over his aging mother and her estate. He believes the twins only exist in her imagination and she has become mentally disabled. The progress of this lawsuit is cleverly fitted in between the episodes in Lena's tale. Since the author is a lawyer, the legal steps are well described. The plot tension revolves around one question. Can Liam Taggart find the girls in Poland before Lena is declared incompetent and turned over to the custody of her son? Before the ending, long hidden secrets must be revealed.

Quill says: A gripping story and well worth reading.