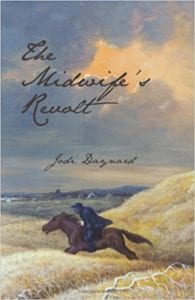 This book is a fascinating story of life during the Revolutionary War and its aftermath. Elizabeth Lee Boylston and her family lived in Boston when the Revolution was about to start. Elizabeth married Jeb Boylston and moved to Braintree, MA to live on a farm given to them as a wedding gift by Colonel Josiah Quincy, a relative of Abigail Adams. Jeb’s family was not happy with this arrangement as they were Tories and rooting for the British in the battle to come.

At the start of the book, Jeb was on his way to Boston to join Colonel Prescott’s regiment to fight for the “Cause.” The first act in this story is about the Battle of Breed’s Hill in which Jeb is killed defending the Rebels.

Elizabeth (Lizzie) Boylston is a midwife, trained in this task by her mother who has since passed on so she leaves Boston after the death of her husband and goes back to the farm to work the land. She also acts as medical help for the citizens of Braintree, mostly for the expectant mothers. Elizabeth becomes a close friend of Abigail Adams and her family and takes on a helper in her work, Martha Miller, whom she thought at one time was a spy for the British. When she returns to Braintree after Jeb’s funeral she finds that two Patriots who were staying with Abigail Adams’ sister, Mary, have died and Elizabeth thinks that they have been murdered.

Elizabeth eventually becomes a spy for the “Cause” and the work is extremely dangerous. She rides her husband’s favorite mount and goes under the name Johnny Tucker, working as a male messenger as she searches for the people she thinks committed the murders. Elizabeth eventually finds a new love who readers will never see coming. There is also a killer in this story who will astound you.

Quill Says: This book of fiction, written about the War for Independence is outstanding. I have read many books about the Founding Fathers but this one takes on the Founding Mothers. This was very different, offering a whole new angle to the time of the Revolutionary War.