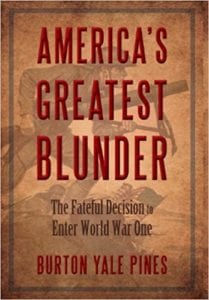 There are many people in this nation who wouldn’t be terribly enthusiastic about reading yet another history lesson regarding the ‘War to End All Wars.’ And I admit, at first I was hesitant too. However, this is the first on the subject I’ve read that is both engaging and educational, while also providing a powerful look at what could have happened if historical decisions had been different.

Author Burton Yale Pines asks the intriguing question: What if the United States had not entered the war in 1917? This was a time when the war had already been going on for three years, why then? This idea is explored and it shows that when the US entered the war it became 'America’s Greatest Blunder,' bringing about negative effects that would change the course of history. The United States originally felt that the country should not get involved, but this eventually evolved into us leaping into the war on the side of the British. To complicate matters, this was a time when many Americans were not terribly fond of the British.

Readers will be glad to know that the author is a fascinating narrator; it feels as if you are sitting in his living room having a conversation. He does not try to belittle or confuse, nor does he fling the idea that America’s entrance into the war was a horrible notion but rather tells, in his own words, why he feels that way. Mr. Pines simply tells of the war; how the war started and why; what happened before the entry of the US and after; and, surprise, surprise, how the wealthy skillfully managed the population into sending American soldiers into a war when most didn’t want that to happen.

Mr. Pines really grabs your attention at this part in his narrative. Anyone, even those who are not history buffs, can understand why the nation was dragged into war. Not a lot of time was spent in the book going over and over the actual strategic fighting; a far more in-depth look is given about the dislike between Commander General Black Jack Pershing of the US and the commanders of British and French forces as well as the fact that the Germans failed in their last attempt to take command. The most important point made is that if the US had not entered the war, the Germans and the Allies (Britain and France) would have probably just stopped fighting as they were dead in the water. The Allies were tired of war and to top it all off the Russians had withdrawn and now had their finger in another pie – helping Germany. If the US had not come into the war, which they didn’t really have to because the interests of the US were not in any jeopardy, peace between Britain, France and Germany would probably have happened and the countries would have put their issues at rest. Instead, the surrender terms on Germany brought the world directly into a legacy of hate that would explode in the future with the German Nazi’s and the Communist Russians.

This book is a wonderful study of World War I and there are not a lot of people, still living, who know very much about it. The author did a great job of research and it would be a fantastic school history book. There are many students today who can’t name the Commanders of the First World War, which is simply wrong. Every facet of this nation’s history should be remembered. How else – as Mr. Pines poignantly points out – will we ever learn from our mistakes?

Quill says: All readers should pick up this book and read it from cover to cover. The author is an insightful narrator who makes readers truly re-think the decisions made in America’s past.

For more information on America’s Greatest Blunder: The Fateful Decision to Enter World War One, please visit the book's website at: www.americasgreatestblunder.com