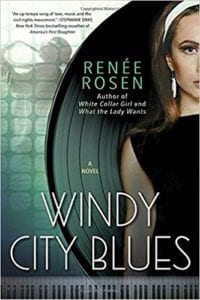 In her latest body of work, Windy City Blues, Renee Rosen treats her audience to a compelling and historical novel devoted to the birth of the blues.

Eleven-year-old Leeba Groski sat on the hood of an old and rusted-out Chevrolet in a junkyard on Twenty-ninth and State Street. Her pals Leonard and Phil Chess sat right alongside her as they reveled in the gospel music pouring out of the church’s open door and windows. The place is Chicago, the time is 1933. Leeba was seven when her family arrived from Poland. She could barely speak a word of English, but fast forward to eleven and she is tapping her toes, clapping her hands and belting out every word to "Jesus Gave Me Water" that came pouring out from that church.

It wasn’t easy being a Jewish immigrant in early Chicago. Money was tight and the Groski’s made do with what they had. Compared to their beginnings in Poland, they were living on easy street in their four bedroom flat on Karlov Avenue. Leonard and Phil lived right across the street. Leeba didn’t have much of a singing voice, but boy could she play the piano. There was always a tune working its way from her mind to the keys of its board. Someday, she was going to write music all the time. The years continue forward and it’s 1947. Red Dupree sits cramped in the Jim Crow car headed north from New Orleans to Chicago. With his broken-down suitcase and his beloved Stella (guitar), he’s headed to the Windy City to claim a life of singing the blues. Little did Red or Leeba know their lives would soon collide. Forbidden love was on their horizon and with it, their lives would never be the same.

Renee Rosen soothes her audience’s soul to the core with her heart-felt story, Windy City Blues. She lays the foundation of her characters in the prime real estate of the first 20-30 pages and proceeds to catapult their beings into an epic novel devoted to the birth of the blues. There is a beautiful kinship this author has with her ‘Windy City’ and it speaks volumes across the pages with outstanding scene set-up; complemented by rich dialogue. Muddy Waters, Howlin’ Wolf, Chuck Berry and Etta James coupled with the iconic Chess Brothers as their producers have all secured their home among the pages. Rosen deserves praise for the research she has done. She owns her talent and ability to take fact and naturally weave her fiction with the facts. There is a sublime and resounding message throughout of: ‘this is a story that had to be told.’ I have had the pleasure of reading a few of Ms. Rosen’s titles and must say she is like a fine wine. Each title is more robust than the last—all, however, genuinely delicious. I say bravo for Windy City Blues and look forward to the next ‘escape’ in the form of a book she delivers.

Quill says: Windy City Blues will have you tapping your toes, clapping your hands and all the while, rooting for the underdog.