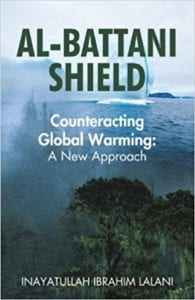 Inayatullah Ibrahim Lalani has a plan to counteract global warming. The trouble is that as a surgeon, rather than a mathematician or physicist, he lacks the credentials necessary to present his idea to those with the resources to act on it. In fact Lalani's approach to combating global warming involves quite a lot of money and also sending people into space. This book is the author's way of presenting his solution to global warming to the public, and to leaders and scientists, as well.

Lalani begins by acknowledging his lack of credentials in physics, but explains in the preface of Al-Battani Shield, “Once past the secondary education, but especially at the doctoral level, ninety percent of knowledge that constitutes the expertise of a specialist is derived from self study and not by didactic indoctrination.” He has, as he calls it, a lively interest in physics and astronomy and is largely self-taught.

These words are also encouraging to the reader who may lack a formal education in science. Al-Battani Shield is an opportunity for anyone who shares the author's interest in science to expand his or her knowledge of global warming. Lalani's writing is unusually clear for a science book and quite easy to follow. He lays out his argument in sequential steps and gives the reader all the background information necessary. Lalani's tone is conversational, with occasional jokes and exclamations, but he is committed to staying on topic. When there are digressions that are simply too interesting to pass over, the author puts them into footnotes or into appendices. The result is a fairly quick read that does not stray from the topic, with supplementary material that readers interested in physics will probably want to read as well.

Lalani steers clear of politics almost entirely. He does not take sides in the debate as to whether global warming is actually happening, nor does he choose to argue whether humans are at fault. Another subject that this book does not cover is ways that humans can reduce the amount of carbon dioxide we are producing. He leaves that job to Al Gore, whose work Lalani acknowledges, and others like him. Though Lalani sees the reduction of carbon emissions as a worthy goal, he worries that people world-wide are simply not willing to give up the comforts that come with their energy consumption.

Therefore, this book proposes a way to cool the earth without reducing the amount of fossil fuels we are consuming. The idea is pretty straightforward, and by the end of this eighty-three page book, the reader will certainly understand what Lalani is getting at. The hard part seems to be determining whether the idea is truly feasible and how to pay for such a project. Lalani hopes that his book will fall into the hands of those who could address these issues, so that those people might take the idea further. In the meantime the rest of us can learn quite a bit about global warming, about climate in general, and pick up some astronomy on top of that.

If you want to be able to talk intelligently about global warming or maybe to use the words “apogee” and “perigee” in conversation, here is an easy way for someone without a science background to learn quite a bit. Readers on either side of the political debate on global warming can learn something about the topic from this book.

Quill says: A quick, easy-to-understand book that will expand your knowledge of global warming and earth science in general.