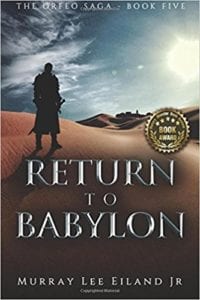 Author Murray Lee Eiland spins a tale of shadows, secrets, and sabotage in book five of the Orfeo Saga.

Orfeo and Clarice are back in Pylos after “their battle with the Spartans.” For the first time in a long time, life is peaceful, almost too peaceful—like the lull before a vicious storm. That is most likely the sense they feel, although they can’t quite put their fingers on why. Moments later, Orfeo, who was on a walk, is attacked. While the police assume that the attack was an assassination attempt, their investigation reveals that foreign agents were in search of Zurga. More disconcerting information unfolds when Webbor, who overtakes the throne of Mursillius the Hittite, sends Orfeo a letter indicating that a “mad assassin” killed Mursillius. The letter sends up a red flag that danger is imminent. The question is who is perpetrating this fear?

The answer comes clearly to Daryush (who now has a kingdom of his own) when he gets word from his spies that his old lover Zinaida (Zurga’s Fire), and now the ruler of Babylon, has plans to kill him. While it is true that she devises his demise, Zinaida’s anger spreads far and wide—even to Zurga whom she has a difficult time locating—to annihilate every person who attacked Babylon and overthrew her father, Nurim Sin. Little by little leaders from areas bordering Babylon are mysteriously murdered, which is unnerving for Orfeo, Clarice, Daryush, and Semira. With Zinaida’s spies out and about and reeking havoc, the troop of friends band together with their neighboring friends attempt to put a stop to Zinaida’s clandestine strategy to rule the world.

Fans of the Orfeo Saga have much to look forward to in book five of Eiland’s inimitable series. Continuing where book four, The Wanderer’s Journey, left off, Eiland places his protagonists within a new battle. But this time it is far different than the fearless troop has ever encountered; one that is veiled in shadows, smoke and mirrors. As with his previous books, Eiland always includes new characters, both minor and major, and the pivotal roles they play in aiding his heroes and heroines in overpowering their enemies. Without giving away any spoilers, featured characters to watch out for in Return to Babylon are Araka and Cyrus.

There are other aspects of Eiland’s writing style that offer a warm welcome to Orfeo Saga fans, as well as newcomers to the series. Besides the information mentioned above, Eiland’s narratives follow a consistent format. Each story is divided into four sections. Each section is broken up into a handful of short chapters. Snippets of back stories from previous books are incorporated in each story, which ties the series together; and when appropriate, Eiland includes historical references. That said, each book functions as a standalone. But once you’ve read one, you’ll want to read them all.

Return to Babylon offers readers another opportunity to explore an incredible adventure into ancient history. Plenty of scene changes replete with twists and turns and yet another cliffhanger closure that will get readers anxiously waiting for The Slave Boy, book six of the Orfeo Saga.

Quill says: Return to Babylon is a page-turner, replete with twists and turns--up to the very end.

For more information on Return to Babylon: The Orfeo Saga, Book Five, please visit the author's website at: murrayeiland.godaddysites.com