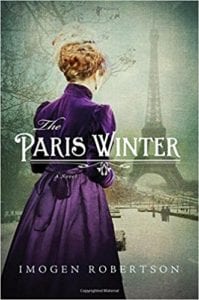 Imogen Robertson channels the ‘Belle Epoque’ era of 1900’s Paris to create the backdrop of her latest novel, The Paris Winter. Using this epoch period of time in the ‘City of Lights’ she tells an intriguing story of emerging artist Maud Heighton.

The story opens with a formalism of The Academie Lafond oil; ‘a loosely painted study shows a life-class in progress’ Maud Heighton is an art student at The Academie Lafond and the news of fellow student and gifted artist Rose Champion’s sudden suicide rocks the students. Maud lives in the same shabby tenement as Rose had—a tenement discretely nestled off the Boulevard Clichy. It was a nondescript building in an equally unmemorable part of town, but Maud had no regrets for leaving the familiarity of her English home and upbringing. She was an artist and it was her destiny to go to Paris and paint. Great artists must suffer on their respective roads to eventual infamy...

Tatiana Sergeyevna Koltsova ‘Tanya’ is the quintessential Russian princess. Contrary to Maud’s destiny of peril and strife to make her mark in the art community, Tanya dabbles in her talents because it is her latest whim. Granted, she has talent, but not the burning passion and desire to succeed like her comrade Maud. Tanya has a kind soul and wishes to help Maud. When she approaches Maud with an opportunity of shelter and warmth from the impending Paris winter, she introduces her to the quirky couple Christian and Sylvie Morel. It seems Christian is in search of a companion for his troubled sister Sylvie and after interviewing Maud, a match has been made in Heaven. With Christian’s immediate generosity of an advance stipend and the promise of the comfort of warmth, shelter and food to sustain her continued art studies, Maud embraces the opportunity and moves into the Morel household. At the onset, life cannot be better. However, as time marches forward, Maud learns a little too late that the choice she has made is one that will change the course of her life forever.

Imogen Robertson has done an admirable job of researching the Belle Epoch period of the art revolution in 1900’s Paris and places the allure and intrigue of it all on paper. She prefaces each chapter with a detailed formalism of artistic style and ability—detailing the brush strokes, imagery and impressions of varied works of art before transitioning into the continuance of the trials and tribulations of her story characters. Her approach captured my interest immediately. Writing is as much a form of art as painting in that a gifted writer manages to paint an interesting story through the use of words and their placement. Ms. Robertson has fused the brilliance of written imagery and the credibility of crisp dialogue and together, has demonstrated her ability to create a cadence that flows as fluidly as perhaps a great painter’s brush flows across the canvass. There are many surprise twists and turns to the story as the plot further develops and at the peak of the story, Robertson gathers loose ends and assembles them neatly together to arrive at a satisfying and clever ending. I am not familiar with Ms. Robertson’s previous works, but after reading The Paris Winter, I look forward to reading some of her prior works as much as I look forward to her next novel.

Quill says: A Paris Winter is both an engaging and educational story of artistic survival during the Belle Epoque period of time in 1900’s Paris.