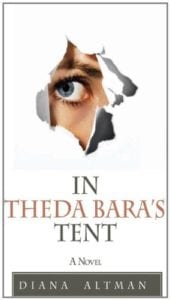 In Theda Bara's Tent begins on a sidewalk in New York City where the main character, Harry Sirkus, witnesses a fire that kills both of his parents. In a scene that will remind readers of the 1911 fire at the Triangle Shirtwaist Factory, workers, mostly young women, jump from the burning building.

I was immediately wrapped up in Harry's story. The book is written in the first person, and author, Diana Altman assumes Harry's perspective flawlessly. The first part of the story is told, convincingly, by a child. We are not allowed any more information than a child would have about the deaths of Harry's parents or about the characters, places, and events that follow. Altman's ability to get inside Harry's head allows us to do the same. Harry is honest, kind, and intelligent. Readers will want to identify with him.

In Theda Bara's Tent was hard to put down. It was also one of those books that stayed with me throughout the day. Scenes from Harry's life would come into my head like remembered dreams, and I found myself telling people, “I'm reading this book...” Absorbed as I was in Harry's life, this was one of those times when I was sad to reach the end of the novel. I am still looking around for the next book that will allow me to disappear into another world.

Altman brings to life a snapshot of New York City shortly before World War I. As the book progresses readers will become immersed in the culture of the period, seeing it through the eyes of Harry Sirkus, the child of Lithuanian Jewish immigrants. Race and class issues, the politics of World War I, the Spanish Influenza epidemic, the struggle for women's suffrage, and prohibition are pieces of the vivid historical backdrop to Harry's coming of age.

Harry discovers early that he is interested in film, and this passion drives him throughout the book. He finds ways to work in the industry, beginning by sweeping the floors of a theater and then working his way up. Harry's intelligence, courage, and good luck keep him safe, clothed, and fed, affording him the opportunity not only to work, but to work in film, while he is still too young even to fight in the war. The men who recognize Harry's abilities, and their wives, help him find places to live while giving him respect and the experience of family, as well. Harry, the orphan, has complex relationships with the men who become his mentors.

Harry combines the strengths he admires in these men with his own native intelligence and sense of ethics while rejecting what he sees as immoral behavior. Harry's difficult life has given him perspective and an ability to identify with the underdog. Readers will admire Harry and feel connected with him throughout the story.

Readers will find In Theda Bara's Tent absorbing as a novel even if they come to it with no prior interest in the history of film. As I became caught up in Harry's story, however, I could not help sharing some of his enthusiasm. Readers will look at the producers, the film stars, and the theaters through Harry's eyes, experiencing the sounds, colors, and personalities behind the old silent movies.

Harry discovers that what he sees on the screen is not always true. The personalities of the screen actors, as portrayed in his fan magazines are mostly fictional, and even the newsreels are often staged. In Theda Bara's Tent is also the story of how the film industry influenced the politics of the time, the power of the media to direct the attention of the public, and the power of money in government. Altman's subtle message about the influence of the media is still very relevant today. Understanding the history of the media's influence on public opinion will give readers new perspective on current questions of media ethics.

Diana Altman weaves history and politics into a compelling story about human relationships. In Theda Bara's Tent is a novel that is memorable and enjoyable on many levels.

For more information on In Theda Bara's Tent, please visit the author's website at: www.DianaAltman.com