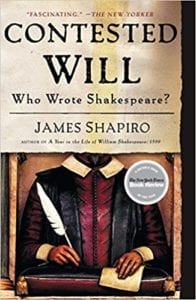 Have you seen the movie Anonymous yet? It’s history and literature through the eyes of Philip K. Dick. An alternate universe steeped in paranoia. This movie, directed by Roland Emmerich, sets out to prove that the plays and poetry of William Shakespeare were actually written by Edward de Vere (1550–1604), the 17th Earl of Oxford, and not by Will Shakespeare because the lad from Stratford-upon-Avon was (a) illiterate and (b) too common to write the likes of Hamlet, Lear, or The Winter’s Tale. It’s the Holy Blood Holy Grail of literary criticism put on film and filled with fantasy, forgery, and flim-flam.

In Contested Will (nice pun), Shakespearean scholar James Shapiro, author of A Year in the Life of William Shakespeare: 1599, takes us through the fantasy land of the conspiracy theorists who think Shakespeare was written by someone “more qualified” to write the plays but who, for various conspiratorial reasons, could not take credit for them. Shapiro steers us carefully through the quagmire of reasons that underlie the theories that Sir Francis Bacon, the Earl of Oxford, Christopher Marlowe, and even Queen Elizabeth I herself were the real authors of Shakespeare’s plays and poetry. Reason (1): We don’t have a lot of facts about Shakespeare’s life. Shakespeare was only a common actor-writer who left his rural home and moved to London. How could he write about royal courts? About Egypt and Rome and Verona and Venice and Bohemia? The will he left at his death contains no mention of books or manuscripts. That obviously means he was illiterate, or at least unread. (2) By the time the First Folio was published in 1623, the author of Hamlet and Lear had already been unyoked from the other great Elizabethan and Jacobean dramatists and elevated to genius. Only a literary divinity could write the plays. Within a century, he was deified. This is called bardolatry.

(3) After the 19th century Higher Criticism “proved” that Homer wasn’t really the old blind poet we think composed the Iliad and the Odyssey, it next “proved” that Jesus was probably not a historical figure but a myth. Who was the Higher Criticism’s next subject? But of course—William Shakespeare. See (1) and (2), above. And then (4), toward the end of the 19th century, the idea arose that literature had to be autobiographical. A writer writes about himself and the events in his life, though he may disguise them in his work. Critics find autobiography all over Shakespeare’s work. His sonnets, for example, are addressed to and about two people he loved. He wrote Hamlet, which is named after his son, after the death of his own father. We saw the idea of literature as autobiography in Shakespeare in Love.

Shapiro next introduces us to the proponents of the major theories that Shakespeare didn’t write his works. Delia Bacon, an American Puritan scholar of the early to mid-19th century, came to believe that the real author was Sir Francis Bacon. She and her followers—among them Mark Twain, Helen Keller, Ignatius Donnelly (the famous catastrophist and “discoverer” of Atlantis), and Henry James—became certain that Francis Bacon, a contemporary of Shakespeare, had hidden ciphers in the plays that pointed to himself as the true author. Fortunately, the Baconians didn’t find any ciphers that really worked. Like the Marlovians, they’ve largely faded into obscurity.

It’s the Oxfordians who are the champions of flim-flam. Those who have believed that the Earl of Oxford is the true author include Sigmund Freud (who also found his Oedipus complex in the plays) and the Positivist John Thomas Looney (not “loony,” but pronounced to rhyme with “boney”), plus Dir Derek Jacobi, the famed actor who appears at the beginning and the end of Anonymous. The Oxfordians are the hippest of the anti-Stratfordians. They’re really good at PR and have used the fairness doctrine to promote their idea. In 1987, they enticed three Supreme Court justices to participate in a mock trial—"In re. Shakespeare: The Authorship of Shakespeare on Trial"—that was even reported by the New York Times. Shakespeare won. The Oxfordians have also persuaded TV and film producers to present their case. And they’re all over Google and Wikipedia.

Shapiro’s final chapter makes the case for Shakespeare. His arguments include the fact that while much of modern literature is indeed autobiographical, that was not the case in the 16th and 17th centuries. He also explains what we know about how dramatists worked in Shakespeare’s day, and concludes with the most cogent argument for Shakespeare—he used his imagination to create the Athenian woods, the Bohemian farmlands, the castle at Elsinore, the English camp before Agincourt, Prospero’s mysterious island. How did he learn about foreign lands and customs in the age before Wikipedia? He bought and borrowed and read books. He spoke with foreign travelers in London. Imagination is any writer’s best tool.