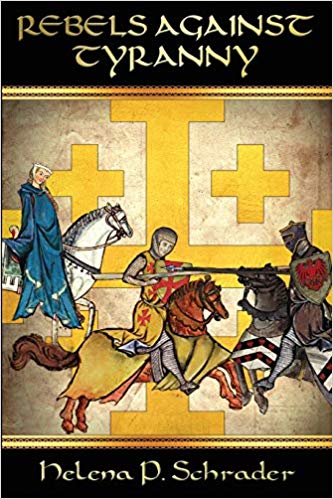 Ah, the Sixth Crusade. What a time period! From the romantic entanglements to the seeking of the throne to the battles that brought about changes in the world…this was the ultimate era. And after reading this book (and for all readers who have had the chance to enjoy Helena P. Schrader’s amazing works combining incredible writing and astounding amounts of research), you will quite literally “see” the Crusades come alive inside your own head. In fact, Schrader is so good at doing this that part of you will not be shocked if you take a look outside and discover knights jousting on your own front lawn.

The first in a new series (Civil War in the Crusader States), this book begins during a celebration featuring jousting matches in Cyprus in 1224. One of the matches held featured Sir Amaury Barlais against Sir Toringuel, who is the family of Ibelin’s knight. Barlais fails and immediately accuses Toringuel of cheating. The anger burns inside of him so deeply that he vows to get revenge. One of the people attending this celebration is a young man by the name of Balian who was just knighted and just so happens to be the eldest son of the Lord of Beirut. He is the one who shall inherit his father’s position and become head of the Ibelin family one day, and is incredibly taken aback by Barlais’s accusations.

Sir Amaury and his friends, Cheneché and Bethsan – who are highly supportive of Amaury and his will to bring pain to the people who embarrassed him – leave and come upon Frederick II Hohenstaufen in their travels. They decide to taint his vision of the Ibelin family by telling him lies about the horrible, cheating crew. This is highly important, because when Balian ages, he too, meets Frederick II and is absolutely stunned by the fact that the monarch acts as if he has no feeling for the Ibelin family whatsoever. This is one of many encounters that shows Frederick’s coldness and inhumane treatment.

Although Emperor Frederick II has been dubbed throughout history as being an “enlightened” soul ahead of his time, his contemporaries have shown a side of him that was tyrannical; a dictator who spawned an uprising of younger rebels battling to save themselves and the people they loved from his heavy-handedness. This is a true Civil War that ripped the Holy Land apart at the seams, and the characters (although numerous) are perfectly drawn. From popes to monarchs to a woman artist, the cast is appealing and keeps readers riveted to the story at all times.

The way of life in the crusader states includes a multitude of daily rituals and strong beliefs. The heir to the Ibelins is a great character for the reader to “walk beside” as dungeons and palaces are entered and the stark contrast between lives of privilege and pain intersect. The young, future Lord is the hero of this trilogy. Not only was he the grandson of the defender of Jerusalem, but he also defied the church and his own father in order to marry the woman he desperately loved. Eventually, Balian stood out from the crowd, so to speak, and became the man who succeeded in his goals and claimed victory over the Emperor. This thrilling hero is, as always when it comes to Schrader’s works of art, one of unforgettable strength.

Quill Says: A vivid, suspenseful tale that will entice readers to follow what will become another unforgettable series by this author.

For more information on Rebels Against Tyranny, please visit the author's website at: helenapschrader.com