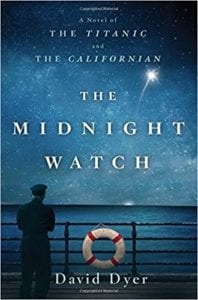 David Dyer blends fact with fiction and delivers a magnificent tale of what (perhaps) really happened in the aftermath of the sinking of the iconic Titanic in his debut novel, The Midnight Watch.

In the barren and frigid waters of the North Atlantic, the Titanic would experience her last day afloat during her virgin crossing from England to America. Something is amiss in the early morning hours of April 14, 1912. The Titanic has entered a field of unyielding icebergs and strikes them head on. The steamer, Californian, is nearby; watching the tragedy unfold. Midnight Watchman, Herbert Stone, witnesses the first of a total of eight distress rockets. It rips a stream of white fire across the dark and desolate night sky in its cry for help. Stone immediately recognizes the maritime distress call and retrieves the speaking tube to alert his sleeping Captain Lord. Imagine Stone’s quandary when the response he receives from his beloved Captain was to persist in further due diligence and not disturb him until he is certain the signal was one of distress. Another and yet another bright white rocket that pierces the night sky to no avail. Communication by Morse lamp and the new Marconi telegraph is non-existent. By the morning of April 15th, the Titanic has been lost to the sea forever; carrying along with her more than fifteen hundred passengers and crew.

John Steadman is a reporter for the Boston American. When word reaches Boston of the tragedy of the ship’s passing, all hands are on deck so to speak. There is a scoop to be gotten and it had better be by the Boston American first and foremost. Steadman was no stranger to compelling stories. He had an innate ability to read the souls of those who had perished. His writing ability gave them life long after death had consumed them. Somehow, the sinking of this majesty of a vessel would be different. Something wasn’t quite right in the timeline and how was it with the Californian being so close but yet so far, she was unable to scurry to the Titanic’s rescue? For the first time in his reporting career, Steadman would face-off the challenge of writing a piece that catered to those who survived versus those who no longer had the luxury of imparting their story.

David Dyer is a lyrical and masterful wordsmith in his telling of The Midnight Watch. He has patiently stepped a story that, to this day, intrigues historians and poses the age-old question of what really happened (beyond the obvious of striking a massive iceberg). There is a beautiful marriage between the fact and fiction across the pages of this story that consumes the reader from the onset. He carefully tends to each of his characters; breathing a splendid believability into their humanness. There is an engagement and connection displayed in each passage of prose Dyer lays out that lends its way to concise and direct dialogue. It is abundantly clear Mr. Dyer was passionate toward laying down facts with precise accuracy as much as he was committed to overlaying the facts with fantastic fictional enhancement. His nautical knowledge is superb in that he demonstrates time and again correct terminology and places it exactly where it is destined to be placed. I applaud this author for penning an exceptional read coupled with the fact it is his debut novel. In my opinion, the stakes have just gotten much higher for fellow authors in this genre. Mr. Dyer is a force to reckon and I anxiously anticipate his next body of work. Well done Mr. Dyer. I am a fan!

Quill says: The Midnight Watch is a compelling read and more than one hundred years beyond her tragedy, the question of ‘what happened beyond the iceberg strike’ continues to plague the curious.