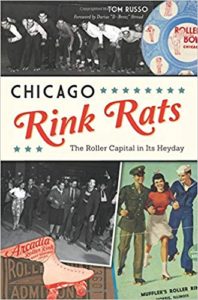 Tom Russo delivers Chicago Rink Rats and takes his audience down a bittersweet memory lane of roller skating in its heyday.

The book opens with a forward written by Darius ‘D-Breeze’ Stroud, one of Chicago’s JB Elite Skate Team and Chicago’s Independence Roll members. Stroud reminisces growing up on roller skates in the 70s and how he continued to do so as an adult who specialized in ”Chicago-style JB skating.” To add color to his reflection, he notes that not only did the Savoy jazz band play at Al Capone’s Rainbow Room, but also entertained skaters at the Savoy Roller Rink. It was all about the music that created the nostalgia he and his companions related to skating whether it was ‘...organ music, the jazz bands of the 1940s or the rhythm-and-blues we skate to today...’

Moving on from the Forward, Russo reflects on his mother’s great-grandchildren and their wonder of just exactly what she did for fun growing up. Of course, there was no internet, computers, cellphones, etc. to occupy the mind from sunup to sundown. She’d smile her melancholy smile and wander back to the time when she and her ‘gang of girls’ would venture out to the roller rink.

Getting into the meat of the book, Russo opens his first chapter, ‘The Golden Age of Roller Skating,’ and sites some statistics such as ‘...there were an estimated four thousand rinks and more than 17 million skaters. The wheels were wooden, roller skating was hip, everyone went to a rink and Chicago was the epicenter. The year was 1943, the world was at war and roller skating promoted itself as a wholesome, social form of recreation that provided relaxation for soldiers, sailors and war workers...’ Russo continues to span the decades from the 40s to the 70s and how the art, nuance and overall draw of the sport transcended not only in skate design, but rink design and the attraction and music as well.

This was an interesting read in that the only form of ‘roller skating’ I had ever done was when rollerblading became popular in the 1970s. To this day, I’ve never donned a pair of roller skates and it was fascinating to read Russo’s in-depth research on the entire sport, be it for recreation, competition and even the birth of the roller derby. There is a distinct tone of nostalgia complemented with history throughout this read. The flow is great as Russo strategically parses his knowledge out decade by decade to his audience to keep them engaged from beginning to end. This is a great read that can appeal to many genres because of its historical content and subject matter. Of special note is that Chicago Rink Rats won the first place/gold award in the historical category in the 2019 Feathered Quill Book Awards.

Quill says: Chicago Rink Rats is a wonderful opportunity to take a step back in time and embrace the innocence of such a time in our history.

For more information on Chicago Rink Rats: The Roller Capital in Its Heyday, please visit the author's website at www.hunt4cleanair.net