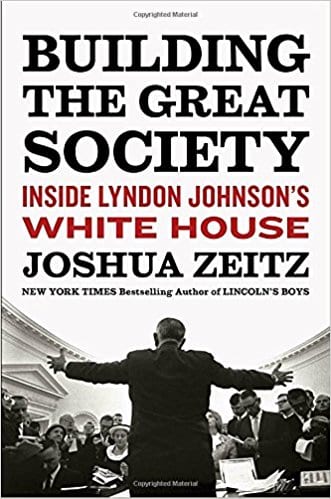 The title of this book is a bit of a misleader. It is not a biography of Lyndon Johnson, but rather the story of the men who worked with him to create the great society.

LBJ expected absolute loyalty from his staff and these dedicated men worked twelve hours a day, six days a week, as well as a half day on Sundays. They believed their mission was to complete the programs initial started by Franklin Roosevelt. This is the story of men like Bill Moyers, Jack Valenti, Joe Califano, and Harry McPherson, and what they accomplished under LBJ's direction.

Building the Great Society does not include detailed descriptions of LBJ's legislative accomplishments, but rather focuses on how these programs were created, defended, and supported by politics and master politicians. Their first achievement was the head start program which provided early childhood education and medical, dental, and eye care for children of poor families. This program was the first one to provide federal funds to improve educational systems in the states.

LBJ  and his staff also created Medicare and Medicaid - in just one year. This was only possible because they based it on the existing health insurance system. In addition, they launched the food stamp program (SHAP) to feed poor children and adults, as well as launched public television and radio. Their toughest battle was getting public and private institutions desegregated in one third of the country.

These men lived in a time when the economy was growing and expanding and believed this situation would continue forever. They did not foresee either runaway inflation or recessions. What is remarkable is how much they accomplished when so many resources had to be devoted to the Vietnam war.

This book is full of historical detail, but, as mentioned above, the focus is not on the people who worked to create so many new programs, but rather on these new programs/institutions created during LBJ's tenure in the White House. Occasionally the author does give the reader a glimpse of the personality of one of the individual members of this group, but it really isn't enough to truly get to know these men. Unfortunately, there are no pictures included in the book of any of the people who made up this fascinating story.  Images would have been a nice addition to place faces with the names so the reader could see them as real people.

Quill says: Anyone who is interested in the political history of this period will find this book well worth reading.