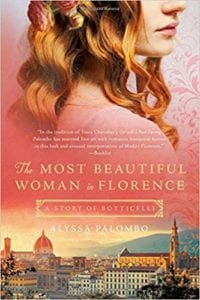 Beginning in Genoa in April of 1469, we find Simonetta Cattaneo, her mother and maid preparing her for one of the most important moments of her life - or so she is told. Signor Marco Vespucci, a Florentine man and an intimate of the Medici circle, has asked her father if he may court her as he has the intention of marrying her. As a member of Genoese nobility and as an extremely beautiful woman, Simonetta is no stranger to the attention of men, however, she craves to be known for more than simply her beauty. She wants to be known and admired for her mind as well. Upon meeting with Signor Vespucci, Simonetta finds herself bored by his subjects of speaking but intrigued by the light in his eyes as he speaks of what he loves. When he notices a copy of La Divina Commedia by Dante, he mistakenly assumes it is being read by her father, and much to his surprise, Madonna Simonetta is the owner of this book. Unwilling to sit by and let it be assumed she is uneducated, she quotes a passage and is met with the following passage being recited back to her. In this moment, she makes her decision. If asked, she will be married to Signor Vespucci and she will revel in the opportunity to be invited into the educated, artistic and gifted Medici circle.

Upon a proposal from Signor Vespucci and being invited to dine with the Medicis, Simonetta is found to be not only beautiful, but charming and brilliant, “a true child of this renascimento,” according to Lorenzo Medici. In their circle she meets poets, writers and artists. As she is awestruck by art, she finds herself admiring work of a man named Sandro Botticelli and is promptly introduced to him. There is no denying that they are artistically drawn to each other and can easily speak about their artistic opinions. Lorenzo remarks that she would make a wonderful subject for a portrait, clearly reading Sandro’s mind. As the Medici brothers joke that Sandro is “mapping out a canvas for her in his mind,” he gives a slight nod to Simonetta, which she returns. It is then she realizes that she has entered into a secret accord with this great artist. Simonetta finds herself so well-liked by the Medicis that they offer to host their wedding on their own grounds, and soon after, she is married to Signor Vespucci. Simonetta, as swept up as she is in Florence, finds that marriage is not what she thought it would be and that who she married is not who she believed him to be either. As she struggles to find her place in life and navigate the “curse” of beauty that she is given, she finds herself falling for Sandro and his educated mind, and she quickly becomes his muse - not only for her beauty, but for her mind - and becomes forever captured in his painting "The Birth of Venus."

From the very instant I opened this book, I was completely drawn in. The story of Simonetta and her life in Genoa was expertly tied into how her life would be in Florence. We could always see that Simonetta craved more out of life and love than many do - she wanted to be respected and loved for her mind and not simply her beauty, as beauty is fleeting. She had such a strong desire to be a part of something bigger than herself, while in those days many women were just content to be married and had no need to be educated. This is still such a relevant issue today and I love how this book deals with multiple issues that can be applied to life as it is right now. The lessons and thoughts tied into this book will be relevant for years and years to come and I found myself staying up too late to continue reading, in suspense of what would happen next. I have never read a work of Alyssa Palombo’s before, however after reading this and craving more of the same style, I could hardly hold myself back from purchasing The Violinist of Venice. If it is anything like The Most Beautiful Woman in Florence, I cannot, and will not, be disappointed.

Quill says: Beautifully written and poetically told, The Most Beautiful Woman in Florence will leave you in tears and rushing to get your hands on anything else written by Alyssa Palombo.