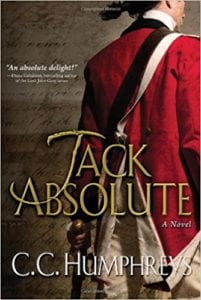 In 1987, author C.C. Humphreys was cast to play the swashbuckling, larger than life character, Jack Absolute, in Richard Brinsky Sheridan’s play The Rivals. In his Author’s Note, he expresses the thrill of being able to commit his experience on paper by sharing his run of playing the lead role of Jack Absolute. How fortunate for the reading world Mr. Humphreys had the wisdom to record the many facets of his colorful character in a book and share the wonder of it all by delivering a captivating, witty and engaging tale.

The story opens with Absolute returning to Hounslow Heath, England after an extended life in the newly-formed American Colonies. The year is 1777. En-route to the far reaches of the Indies (Nevis) to sort out family business, Absolute is on a mission to salvage what little fortune is left of the debacle of his family’s diminished wealth after the passing of his father. With his towering sidekick and trusted companion, full-blooded Iroquois, Atedawenete (Ate) at his side, Absolute’s plans were to make this side trip more than brief before continuing on. Sometimes the best laid plans go terribly awry and when Absolute fails to keep his notorious affinity for women at bay, it is no surprise this was one of those times. Unbeknownst to Absolute, his latest conquest, Elizabeth “Lizzie” Farren, is already spoken for. When clarity of this factor comes a little too late, Absolute finds himself challenged to a duel with Banastre Tarleton; a scoundrel with motivations and an obvious dark side who also happens to have previous claim to Lizzie. Even though dueling is forbidden, the challenge is set. When first blood is drawn by Absolute, Ate and he must flee at once from the scene of the crime. Without many options, Absolute has no choice but to engage in a mission presented to him by his former commanding officer, General Burgoyne.

Ushered rather quickly out of England, Ate and Absolute join the ranks of Burgoyne’s military campaign aboard the vessel Adriadne; bound for the American Colonies. Absolute learns the intricacies of the mission while under sail. His role will be that of a spy for the British Army and the task at hand will be to expose and expunge the Illuminati; a secret society for the rebel cause. Two more characters are further defined once ocean-bound; the despicable Count von Schlaben and delectable Louisa Reardon. It is the latter character, Ms. Reardon, with her piercing green eyes, petite and desirable frame and mane of auburn locks that create the latest dish of a desirable dessert for Absolute’s palate—one which he simply cannot resist and can only result in future angst. The tone is set and the reader cannot contain the anticipation toward the unforgettable adventure about to unfold.

C.C. Humphreys takes no prisoners as sparks fly from the endless pages of witty banter and high intensity adventure; truly a solid attribution to the character he once played on the stage. There is a continuity and natural flow through his words that place his deserving main character, Absolute, in many colorful situations worthy of the spotlight. It is no surprise Humphreys was compelled to pay this delightful tale forward from stage to page. He has done an admirable job of infusing distinct and accurate historical points into the story; complementing the notable time reserved for the history of the birth of America. Humphreys demonstrates great passion in how his words have been placed. He’s done a fine job of painting a clear vision of early America and its desire to be independent. He also balanced this time in history by addressing the hefty price that had to be paid in order to get there.

Quill Says: Jack Absolute is the absolute delivery of an action-packed adventure that reaches far and above the simple notion of a ‘good’ book.