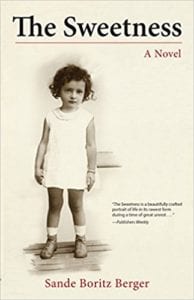 Sande Boritz Berger delivers a poignant account of the horrors and devastation resulting from the 1941 German invasion of the Vilna (Vilnius) Ghetto in her debut novel, The Sweetness.

It is 1941 in Vilna (Vilnius) Lithuania and 'evil' is a word that does not come close to describing what is happening to an entire population of innocents. The Germans are closing in with their mission to destroy the course and lives of an entire civilization. It is here where we meet eight-year-old Rosha. Perched by the curtains in her family’s living room, Rosha does not understand why her Bubbe insists she move away from the window for fear 'they might see you.' It is Friday night and Mordecai, Rosha’s Poppa, is late. Rosha does not understand why Mama and Bubbe are upset. She thinks about the random conversations among the adults-whispers between the butcher and his patrons, the '...dry clacking sounds of people’s tongues. When they whisper, their heads shake and their smiling eyes turn dark. All of this makes me think I am not paying good enough attention...' It is nearly sundown. Mama worries and wonders if Mordecai forgot what day it was and the necessity for him to be home now.

In the same lifetime and thousands of miles away in Brooklyn, New York, Rosha has a cousin, Mira Kane. Poppa’s brother and sisters left Vilna behind to make their new life in America. Mordecai was to join his brother Charles (and his wife, Ina), but he wasn’t ready to go with them and leave his Vilna roots quite yet. Like many immigrants who fled to America in the ‘40s, Charles was one of the fortunate survivors. His hard work and persistence paid off. He owned a successful business in the garment district—his signature production, sweaters. His daughter Mira has bigger dreams than a life of factory work in her father’s business. Living a life of privilege gained her entry into the prestigious designer school and her future was pointed toward Hollywood. Her design talents would pave the way. Unbeknownst to any of the Kane family members, the 1941 Nazi invasion of Vilna would be the catalyst to drastically change the course of each life of every Kane family member.

Ms. Berger has captured the essence of conflict between Charles Kane’s survivor’s guilt and Rosha’s innocence of youth as she compares the circumstances between one family’s choice to stay as the other flees. While the tone is not maudlin, Berger’s voice resonates across the pages with a deep and soulful pain as she depicts the 1941 Nazi invasion of the Vilna Ghetto. It is clear she did her research given she infused historical information and tied her story line to actual events with the backdrop of an epically tragic time in history. Berger has created wonderful flow and rich character development. Nonetheless, I found it difficult to read at times because The Sweetness is yet another reminder of the absolute evil humankind is capable of delivering. However, it is because of this very sentiment I give Ms. Berger tremendous props for taking on such a topic and her ability to deliver it with tenderness. Without spelling it out, she left this reader with the thought: "We must never forget..." Congratulations Ms. Berger; truly a beautiful story.

Quill says: There is bitter sweetness in The Sweetness, but the prospect of hope balances the flavor of comfort this story delivers.

For more information on The Sweetness, please visit the author's website at www.sandeboritzberger.com