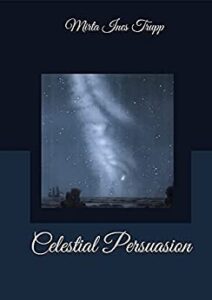 An intelligent young woman will grow in strength and understanding at a time and in places where women’s equality was little recognized, in this emotive novel by Mirta Ines Trupp.

We meet Abigail Isaacs in 1811, suffering the tragic loss of her father. She writes about the event to her brother Jonathan who is working at sea as a ship’s officer and unofficial physician. Little does she know that her brother’s life is in peril; then she gets word of his passing from Captain Wentworth, who, having spent some time with Jonathan, feels that he is “part of the family.” Wentworth also knows Abigail as a brilliant young woman and a self-educated, highly motivated astronomer. Abigail is now, it seems, bereft of all close family, having been left with an inadequate income.

At the encouragement of Wentworth and others, Abigail decides to sail to Argentina, where there may be another means of support awaiting, established by her father and brother. Abigail is Jewish but has been sheltered; as she enters the wide world, she will encounter those who are virulently against her faith and heritage. She will also meet Lt. Raphael Gabay, who is attracted to her, even though much of their relationship seems riddled with conflict. They agree, however, on the need to help the people of Buenos Aires in their fight for freedom. And Gabay may have something to tell her that will change Abigail’s life and alter her opinion of the bold lieutenant.

Astute readers will quickly realize that Trupp has paired her story with that of Jane Austen’s Persuasion, since Captain Wentworth, a key character in this work, also had a role in Austen’s novel. There can be no doubt that Trupp has engaged in serious research to construct this lively, literate tale. The elements include: the language and manners of English aristocracy in colonial times; rough life on shipboard; revolution in South America; Jewish cohesion and customs; the mystique and metaphor of the heavens; and the seemingly unlimited manner in which women in all levels and climes were assigned an inferior role to menfolk. All play their part in what is not only Trupp’s stirring tribute to Austen’s aspirations as an author and a feisty female, but also, at its heart, a deftly developed romance between two equally matched people caught up in a whirlwind of longing, loss, and the possibility of enduring love.

Quill says: In Celestial Persuasion, Mirta Ines Trupp has brought the past to life in her story-telling, her wide knowledge of history, and her genuine wish to connect with an earlier, similarly gifted woman and wordsmith.

For more information on Celestial Persuasion, please visit the author's website at: www.mirtainestruppauthor.com