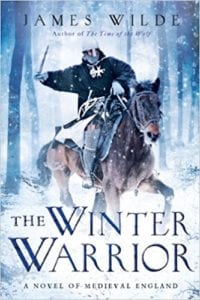 In October of the year 1066, the one year that everyone seems to have read about, there was a battle called the Battle of Hastings. This battle devastated England because of the fact that King Harold, the King at the time, met his fate on the war torn fields. Duke William of Normandy then proceeded to savagely kill everything and everyone in his path in order to gain power and rule England with an iron fist. Duke William, aptly named William the Conqueror, was crowned King William I of England and continued his passion to decimate the country.

Fortunately for England, there is a man who is waiting to send the foreigner back to Normandy with his tail between his legs. This is the man who is the only hope for England’s future. He is called Hereward, the Winter Warrior.

Hereward is the son of a landowner. Using the ‘fen’ country, a land of swamps and darkness as his home base, he works on building an army of men who represent the outcasts of a variety of towns and villages that suffered when the new King took them over by force. The army is growing by leaps and bounds. These men, rejected by society, are ready, willing and able to kill and maim anyone who gets in their way. But King William I is not a pushover. William has a ruthless man in his command named Ivo Taillebois. This man, known as ‘The Butcher,’ is beyond gritty and angry, and will do whatever it takes to put an end to the rebellion.

As the reader goes in-depth into the rebellion that was pure blood and guts, they will become immersed by the schemes planned and the battles fought in order to bring about massive change to England.

This novel, The Winter Warrior, is the second book in a series by this author although it can definitely stand alone. There is much blood and gore in this story and it is full of misleading deceit among men. Hereward is a good main character and will be seen in the minds of readers as being the epitome of heroic, but he also can lose control. These are a group of really nasty individuals. The book tells us that Hereward may have been the model for Robin Hood. This is certainly believable, but Robin used his bow and arrows and hung out with far more ‘merry men’ than the ones who Hereward had to deal with.

Quill says: Readers who are history buffs will enjoy the battles, the action and the characters of this amazingly descriptive story.