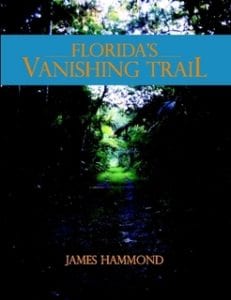 In the slapdash development of our natural lands, many historical sites are disappearing every day. In 2003, James Hammond set upon a research project to rediscover Florida’s forgotten forts used in the Seminole Wars, eager to document them before they were completely lost to the present. He writes, “I decided to take a journey to the banks of the Caloosahatchee River, where I decided that I would begin my own search for historical truth. What I eventually discovered in my own personal quest for answers on the path less traveled, was that by taking A Step Back in Time, it has indeed without a doubt- Made all the difference……” [sic.]

Florida’s Vanishing Trail is a far-reaching collection of facts, data, original documentation and historical photographs gathered by Hammond while he was working on a research project for the State of Florida’s Division of Historical Resources. The purpose of the project was “to assemble all relevant data in the Army Forts of Southwest Florida during the Second and Third Seminole Wars through books, journal accounts, State files and records, and Historical archives.” This book displays straight-forward records of historical information, such as excerpts from a lieutenant’s journal from 1841, a synapses of a survey report from state files, obituaries of minor historical figures from Florida’s past, and excerpts from original historical documents.

The author freely admits in his prologue “I never had intentions of writing a book.” He is a self-described “student of history” who seems to have a keen enthusiasm for setting to record documentation about the army forts and other details of Florida’s early history, particularly that of Collier County. Florida’s Vanishing Trailindeed acts more as historical text rather than a re-telling of stories from history. For most of the book, Hammond writes in a dry, academic style that might appeal to the most dedicated history buffs of Florida history. Hammond leaves few stones unturned on his quest, as he documents an impressive array of details, such as descriptions of the forts used during the Seminole Wars, documentation of the settling of a county, data about agriculture of the early 1800s in Florida, an enumeration of monuments used in 1940s survey maps, and photographs and descriptions of five locomotives used in Florida in the 1900s. The massive variety of historical facts are at times haphazardly organized but clearly lovingly culled by a dedicated man.

As the American forts are Hammond’s main interest, he relays Florida’s early history from an American soldier- and settler-favored point of view. For instance, he describes the Seminole Indians as “hunting” the U.S. soldiers while skipping anything but a passing description of why the Seminoles might want to kill the soldiers not to mention the near obliteration of the Seminoles from the land they had been living on for generations. That said, toward the end of the book Hammond includes a compelling, unique section on “Josie Bille – Medicine Man,” who was the shaman for the Panther Clan who lived in the Everglades in the 19th century.

One of the treasures found in this book has to be the unique collection of uncommon, historical photos from Florida’s early history as a state. Hammond displays wonderful photographs of those early, tough-as-nails settlers, the Seminole Indians, centuries-old houses and buildings – all sorts of terrific historical nuggets that give the reader a glimpse of life back then. Also dotted among the factoids, documents and photographs are interesting paragraphs where Hammond succeeds in bringing history to life through the telling. For example, Hammond relishes the tale of “Southwest Florida’s most famous outlaw,” Edward J. Watson who later became known as “Bloody Watson.” Though one wishes for Hammond to share more of these compelling tales, they are nonetheless revealed as gifts from the past in the reading of Florida’s Vanishing Trail.

James Hammond undoubtedly maintains a deep affection for the Everglades and South Florida’s early history. This book certainly seems to be a labor of love that he concludes with a historical and pictorial tribute to Deep Lake, one of five sinkhole lakes in Florida and a beloved “secret” place to the author. It certainly would be an adventure to set off in search of Deep Lake or any of the other lost treasures that Hammond enumerates in this book.

Florida’s Vanishing Trail is Hammond’s tribute to Florida’s early history. Certainly, he has great respect and admiration for the early pioneers of Florida: “Their dreams that each one found the strength to come boldly to the very doors of a vast wilderness, realizing that the path they were traveling on was, only a trail that had been blazed long ago. Every one of them perceived that they had a duty and an obligation, and it was this sense of responsibility that history always reserves a place of honor for.”