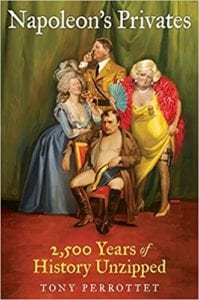 It’s easy to think of famous historical figures as the dignitaries they professed to be. Larger-than-life accomplishments and the filter of hundreds of years of historical propriety lend a gloss that tends to obscure their more human attributes.

Prepare to remove those rose-colored glasses.

Tony Perrottet's collection of risqué stories could have been titled Everything You Wanted To Know About History (But Were Afraid To Ask). It's packed with amusingly revealing peeks into the personal lives of some of the world's most famous entertainers, artists, politicians and rulers. Nothing is off-limits: medical conditions, sexual preferences, bathroom habits, and things you didn't even know you wanted to know about people you thought you already knew. Eye-popping tales of lavish parties and excess abound, from the Romans and Greeks of the ancient world (“Holding Your Own at Caligula's Orgies,” “Imperial Roman Sleaze”) to the rise of modern industry (“Those Dastardly Robber Barons [What Did They Really Get Away With?]”) and American politics (“JFK's Home Delivery Service,” “What Was J. Edgar Hoover's Favorite Party Outfit?”).

The 50-some one- to three-page articles that comprise this book are dated by year and titled according to subject matter. On page 2 of his introduction, the author urges the reader to “crack its spine the way you might open a museum's mahogany doors, and poke about at random.” An analogy about peeping through a keyhole might be more apt. Fair warning: once you look, it's hard to look away!

In addition to the famed Frenchman of its title – whose private woes are a recurrent theme – the book's subjects range from Abraham Lincoln to the Marquis de Sade, from Catherine the Great to Adolf Hitler, and everyone in between. (For those with specific interests, there is an index at the back of the volume.) Included are the answers to all those unasked questions about chastity belts, castrati, and the terrifying levels of self-indulgence practiced by human beings with and without means. Who among us has not wondered if wine glasses were really designed in the shape of female anatomical features? Or what was served at the final meal aboard the Titanic?

Also included are handy easy-reference charts with titles like “Where Are They Now? Celebrity Body Parts” and “How Wretched Were The Impressionists?” plus a number of entertaining sidebars with additional interesting tidbits of information. Did I mention that the author gets up close and personal with the privates in question?

The book appears to be well-researched and is thoroughly annotated, citing numerous first- and third-person references. The author notes when records have been destroyed (an unfortunate habit common among the surviving relatives of foolhardy individuals who commit their transgressions to paper) with little or no comment, leaving the reader to arrive at their own conclusions.

Tony Perrottet's degree in history and background in journalism serve him well here, and he treats the delicate subject matter with a perfectly detached combination of honesty and light humor, resulting in a read that’s deliciously naughty but still within the realm of good taste.

Quill says: This entertaining, er, romp through history is sure to amuse any fan of history and juicy gossip. One thing is for sure: you’ll never feel the same way in a museum again!