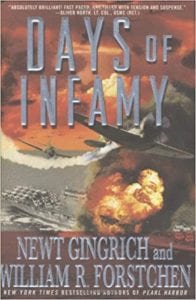 In the alternative history novel Pearl Harbor, authors Gingrich and Forstchen explored what might have happened if Admiral Yamamoto had directly led the attack on Pearl Harbor, rather than staying in Japan. Following up on that successful endeavor, they have written Days of Infamy which picks up right after the attack.

As Days of Infamy opens, Admiral Yamamoto’s task force of six carriers, supporting cruisers, destroyers and two major battleships launch an attack from the northwest of the Hawaiian Islands. They catch the American battleships lined up in rows and with a succession of three waves of planes eliminate the majority of capital ships of the United States Pacific naval forces. There is fear of an imminent invasion by Japanese troops and panic spreads throughout the islands. On a following night the Japanese battleships Akagi and Hiei launch a bombardment of much of the Island of Maui’s infrastructure, firing repeatedly with their fourteen inch guns with shells the size of small cars.

Admiral Bill ‘Bull’ Halsey is off to the southwest of Oahu with the aircraft carrier Enterprise carrying out special training when they hear of the attack. They desperately try to get confirmation of what and where the attacking forces are. Halsey also tries to get any information of possible ground invasions. He launches a series of scouting probes in the areas where they suspect the Japanese might be.

Meanwhile, Admiral Draemel has collected several destroyers and one cruiser which managed to get out of Pearl Harbor and launches a series of attacks at the Akagi and Hiei using the cruiser’s firepower to help suppress the firing on the destroyers while he launches attack after attack on the Japanese ships with the torpedoes of the destroyers.

We're all aware of the history of the attack on Pearl Harbor and those who lived through it can almost recite the events. In Days of Infamy, however, the authors have added a fascinating twist to the story with the simple question of “what if?” What if Yamamoto had accompanied his fleet to Pearl Harbor? The authors have convincingly created an alternative history that reads true-to-life, wrapping real historical events with imagined twists. I found myself wrapped up in this account as the authors successfully brought history to life - I couldn’t put the book down.

The photos from the Naval archives help to refresh memories and support the story.

Quill says: This story is well worth reading.