Miep and the Most Famous Diary: The Woman Who Rescued Anne Frank’s Diary 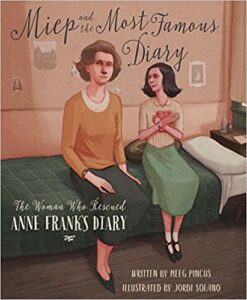 Miep and the Most Famous Diary: The Woman Who Rescued Anne Frank's Diary

"Thump...Thump...Thump..." starts this solemn, true story of the woman who saved a diary in 1944, a diary that would become the most famous one ever. Miep Gies was a courageous, caring woman, who risked her life over and over again, in order to save, help, and protect as many people as she could, while she herself lived through World War II in Amsterdam. Anne Frank and her diary are well known worldwide, but many people do not know the story of Miep, who lived to be 100 and penned an autobiography of her own.

This book, aimed at simplifying this historical, tragic tale for a younger audience, brilliantly uses sound effects (onomatopoeia ) throughout the story, begging you to read it out loud, as it should be. From that first “Thump,” which is the sound of Nazi officers on Miep’s back stairs, to the “Sssssshhhhhhhhhhp” of slicing open an envelope containing a heartbreaking letter, author Meeg Pincus does a wonderful job of keeping readers engaged in the awe-inspiring story of bravery and compassion. When Miep rescues the diary after the family is captured, it is her wish to safeguard it until Anne herself returns after the war to publish it.

More than a year later, Otto Frank returns to the Gies family, where Miep once again provides more than just shelter for her weak and ailing friend. When they sadly learn of Anne and her sister’s death, Miep hands over the diary to a grief stricken Otto, who learns what a talented writer his daughter was. Poor Miep could not and did not bring herself to read the diary herself until many years later. She was fascinated at how famous the diary has become and encouraged by Anne’s words to continue living a life of hope and help.

The “Author’s Note,” “More About Miep’s Courage,” and the “Timeline of Miep’s Life” at the end of the story are insightful accompaniments that will help explain and encourage conversations about World War II and the circumstances surrounding this era.

Quill says: Miep and the Most Famous Diary conveys a tender tale of a troubling time. You’ll want to read this one aloud and be prepared to help children understand how small and large actions alike can create the most incredible outcomes!