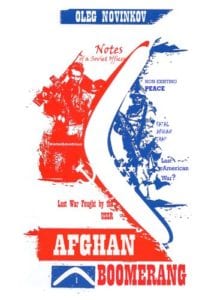 This is a very interesting book that was written by a former Soviet Medical Officer who was deployed to Afghanistan during the Soviet-Afghan War in the 1980’s and worked there for 21 months. The officer, Oleg Novinkov, tells of his military experiences and gives readers a historical account of the country and his thoughts about the war as it relates to the current United States-Afghan War. In the year 2010, Dr. Novinkov returned to Afghanistan and tells readers of his thoughts and experiences during his trip back.

Dr. Novinkov speaks about various conflicts from the past, using movies and books regarding war to help further make his feelings clear. A good analogy of his trip might be the movie Back to the Future, concerning a boy who traveled back in time to see what went on when his parents were teenagers and how it affected his life in the future. Dr. Novinkov now lives in the United States and has lived both in a capitalist country as well as in a socialist country where he grew up and worked. Therefore, he has a unique background from which to compare, contrast, and give his opinions. It is intriguing to read about his ideas and thoughts regarding the politics and politicians of each country. Readers will be fascinated by some, if not all, of Dr. Novinkov’s views regarding the many issues facing the United States today.

Dr. Novinkov writes about what it was like to be in the middle of combat conditions during the war in Afghanistan in the 80’s and makes comparisons regarding the current war in Afghanistan with America. The doctor seems to feel that the United States didn’t use the situations from the 80’s as a learning experience and that the US didn’t go back to study what happened in the war between the USSR and Afghanistan in the past. The question on his mind at this time is, “Will this present war cause the complete collapse of the United States?”

Dr. Novinkov tells us of his times in Afghanistan in the 80’s and also in 2010, when he re-visited the Afghan country and relates historical facts to readers that the media did not report. The doctor states: “I had the opportunity to return to Afghanistan 30 years after serving in the Soviet-Afghan War, and I show how things have changed and how they have remained the same. I share personal experiences to help readers, especially U.S. audiences, understand the world situation and the effects of war.” Dr. Novinkov has faith that his book will teach those who want to understand more about the events in that country and will look at Afghanistan from a different angle. The book is called Afghan Boomerang, for a very interesting reason - we all know that a boomerang is something that is thrown out and will return, and sometimes do more harm on its second trip through the air.

For readers interested in first hand experiences, this book is an inspiring read. Readers will both enjoy and commiserate with the doctor in his travels and, perhaps he didn’t set out to amuse but, he did. Perhaps after moving to the United States the author’s experiences in the first war came back to haunt him. Dr. Novinkov is, in my humble opinion, a person who takes no prisoners and I admire that.

Quill says: As we all know, especially history buffs, there have been wars from the beginning of time and probably, sadly, there will be wars to the end of time. Unfortunately, there will always be someone who wants to be “King of the Hill,” no matter who they are or what country they represent. This book provides interesting insight to one such country and the wars fought there.