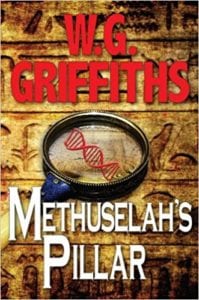 According to the Bible, Methuselah is the oldest person in recorded history, living to the ripe old age of 969. He is said to be a direct descendent of Adam, part of the lineage linking Adam to Noah. Author W.G. Griffiths takes it one step further, imagining a pillar given to Methuselah by his great (times seven) grandfather Adam. What power might this pillar hold and more importantly, could somebody, good or evil, learn to control this power?

Methuselah’s Pillar opens in Afghanistan, with a shepherd minding his flock. When he suddenly finds himself in the midst of a battle, with bombs bursting all around him, he dives into a nearby crevice created by one of the bombs. The shepherd soon discovers an ancient room within the fissure. There’s an altar and a pillar with some text, written in an unfamiliar language, scrolled upon it. In a panic, the shepherd grabs a couple pieces from the pillar that shattered during the bombing and makes a hasty exit before the room collapses.

The fragments from the pillar fall into the hands of Ramses al Tarik, a worshipper of the Egyptian god Anubis and leader of the terrorist group Lions of Justice, who is intent on using the power of Methuselah’s Pillar to overthrow the Egyptian government and “pilfer millions in the name of faith and country.” (pg. 28)

Fortunately, fighting on the side of good is DIA (Defense Intelligence Agency) agent John Decker and Dr. Samantha Conway, archaeologist and ancient writing scholar. When Decker is taken hostage by Tarik, he learns of the pillar and more importantly, the plagues it appears capable of creating. From here, the race is on to see who can unlock the secrets of Methuselah’s Pillar first.

The action picks up immediately in this thriller as we meet Samantha, who is diving deep into a well in the Valley of the Kings to find a way into an undisturbed tomb. It’s quickly apparent that Samantha is a very gutsy young woman – she’s a female version of Indiana Jones, minus the fedora. And Decker is a very interesting character too, with his bravado and expert fighting skills. Of course, what suspense novel would be complete without a really bad, love-to-hate-him terrorist? Tarik fits the bill perfectly and I suspect the reader will relish the terrorist’s role within the pages of this novel as much or more, than the others’. The author has created a world with three very rich and imaginative main characters, people the reader can quickly get into and want to learn more about. It’s part of what keeps the pages turning so fast.

The other effective page-turner method is using fairly short chapters that alternate the action between the three main characters. Most chapters end leaving the character either in imminent danger or, as in Tarik’s case, about to do something horrible. This means you’ll have to read just one more chapter, and then another and pretty soon you’re halfway through the book. There’s a lot happening in this novel and very few pages where the action slows. While Samantha’s assistance rescuing a planeload of ill passengers strains believability, the rest of the action reads true and realistic.

For more information on Methuselah's Pillar, please visit the author's website at: WGGriffiths.com