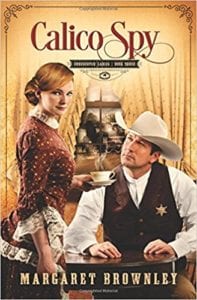 In her latest detective series release, Calico Spy, Margaret Brownley introduces Katie Madison. She’s a spit-fire, red-headed, sure-footed Pinkerton Detective who pulls out all the stops when it comes to taking down the villain.

Katie Madison isn’t like her sisters. Maybe she could have been had her one sister not up and married the man she loved. With nothing left to lose, Katie signs on with the Pinkerton Detective Agency. As far as her daddy was concerned, she made her bed and all that was left to do was lie in it. Katie had a natural flair for surveillance. She could separate a no-do-gooder from a law abiding man any day of the week including Sunday. She was a good girl and practiced her faith always and perhaps in due time, her daddy would understand the path she chose to mend her broken heart. Her latest undercover assignment took her to the far reaches of the Kansas plains and her cover was waitressing. However, she wasn’t your typical run of the mill waitress. Rather, she was a Harvey Girl; the best of the best with perfect posture, a beautiful smile and without question, a Harvey Girl always embraced the notion that the customer is always right. However, Katie Madison may be the Harvey Girl to change the image forever more.

There’s a serial killer lurking in the shadows of the Harvey restaurant and while Katie’s fellow workers have no idea she is the plant in place to (hopefully) solve the crime, Katie needs to own her waitressing role and protect her cover. With the townsfolk on edge and little clues to go on, Katie wastes no time assessing the clientele. She was much better at surveilling than she was at memorizing drink orders. The last thing she needed was another distraction and that’s exactly what she was about to get the day Sherriff Branch Whitman sauntered into the restaurant. While it would seem they had a common interest in catching the killer, Katie wasn’t quite prepared for the extracurricular distraction Branch was about to provide.

Margaret Brownley paints a believable picture of what life must have been like for a woman detective in a man’s world during the early settlement days. Brownley seizes ample opportunities to infuse situations of conflict between Kathie and Sherriff Whitman and uses this to her advantage as she weaves a sublime sub-plot of romance behind the scenes. Once the reader is hooked on such a notion, Brownley gets back down to her brass tacks by redirecting her readers back to the suspense of the overarching plot. The dialogue is credible and the characters are identifiable and likeable. I’ve not had the pleasure of reading any of Ms. Brownley’s previous work. However, Brownley has certainly struck a winning formula in Calico Spy. The story flows and it is rich with many occasions for a chuckle here and an aha moment there.

Quill says: Calico Spy is a quick and enjoyable read that will have you rooting for the heroine with the turn of each page.