To Shine With Honor – Book One: Coming of Age 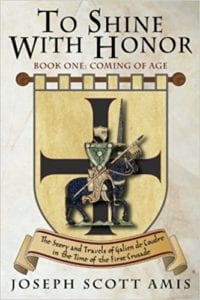 To Shine With Honor - Book One: Coming of Age

As young Galien de Coudre, the third son of well-known knight Henri de Coudre, comes of age he is faced with the impending thoughts of his future and where it will take him. Even though he has always been trained to go into the Priesthood as his father wanted for him, Galien cannot help but see that he increasingly favors the life of a knight. With two brothers to practice with, Galien is no stranger to the skills of swordplay and horseback riding and with each passing day he is finding that his heart is edging toward the career of a knight and not a priest. His chance comes when the family is threatened by a neighboring enemy and Galien is thrown into the battle next to his brothers and proves himself worthy to fight as a knight. After seeing this skill Galien indeed has, his father must admit that he would make a great knight and play a crucial part in protecting his family’s home and lands.

Galien's father’s opinion soon changes, however, when it is revealed that Galien has fallen in love with a servant girl named Lisette, who began serving in the house after her husband was killed in a previous raid. Not willing to let his son marry below his station Henri de Coudre decides that Galien should be sent off to a monastery for six months and then decide what his path in life shall be. Wanting to respect his father’s wishes Galien sets off for the monastery but not before he tells Lisette of his love for her. In his heart he still feels that he will return to his family’s land and become a knight but knows that to go against his father’s wishes at this time would be foolish.

Not wanting to waste his time Galien quickly finds that he has a talent for architecture and is assigned to help a famous architect named Joseph within the monastery. It takes little time for Joseph to see the great potential in Galien and after weeks of working together Joseph offers a permanent job to Galien with impressive pay that is more than he ever hoped for. Now, thinking of the future, Galien is now questioning whether the life of a knight is really what he should be doing, as he is now making much more than he ever hoped to make as a knight, and the work is not quite as dangerous. However, he also has constant thoughts of Lisette and what would be best for each of them, so now Galien if faced with a choice to follow his heart or his head and then vigorously follow it.

This was a well-written and eye opening story that truly brought to life the daily struggles and decisions of the people in this age. I enjoyed that author Joseph Scott Amis wrote in a way that conveys the characters real lives and did not try to diminish the struggles that these people faced at the time. It was easy for me to understand the decisions each character was making as Amis clearly presents how the customs and beliefs shaped the way these characters conducted their lives, careers, and marriages. I found myself wanting to hurry into the next book to find out what obstacles Galien will come to next.

Quill says: For any reader who has an interest in medieval history, this book is a perfect fit.