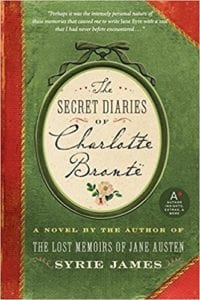 While we know that Charlotte Bronte did not leave behind a secret diary, Syrie James’ book offers a delightful portrait of this groundbreaking nineteenth century author. The Secret Diaries of Charlotte Bronte offers a compelling story that focuses on the lives of the Bronte sisters as told by Charlotte.

If you haven’t heard of the Bronte’s, here is your opportunity to learn about this amazing family that included three respected female authors, and one not so respected brother. The household was led by their father, Patrick Bronte, a clergyman in rural Haworth, England. Almost out of the womb, the three surviving sisters were destined to become authors, writing journals and stories from an extraordinarily early age into adolescence. In 1846, the sisters jointly issued a poetry collection that was published using pseudonyms, both to maintain their privacy and to hide their true gender. Though this first publication hardly saw the light of day, the three sisters continued their writing pursuits, finally earning positive literary criticism. Emily Bronte earned recognition with her torrid tale, Wurthering Heights, a book that became the talk of London; while Charlotte’s Jane Eyre, a story of a plain, docile school teacher, caught the attention and imagination of the reading public. The least successful of the novels was Anne’s radical story, The Tenant of Wildfell Hall which depicted a woman who left her alcoholic husband – a farfetched theme for the time.

It is with this backdrop that James recreates Charlotte’s life: her dreadful childhood experience at the Clergy Daughter's School, followed by her time at Roe Head, to the death of her siblings, and finally back to the marriage proposal and her untimely death. A critical juncture in the story comes when Charlotte assumes a teaching post in Brussels and falls in love with the head of the school, Constantin Heger. While it is unclear what actually transpired with Mr. Heger, we do know that Charlotte’s relationship to Mrs. Heger was quite strained. In telling Charlotte’s story, James makes the persuasive argument that all Charlotte’s publications, but particularly Jane Eyre, were drawn directly from events in Charlotte’s life.

When Charlotte died, Ms. Gaskill, a feminist writer of some renown, and a friend of the Bronte’s, was persuaded to write a biography of Charlotte. In deference to the time, it was a somewhat sanitized version of events, especially relating to Charlotte’s period in Brussels. The biography was also later criticized by reviewers for Ms. Gaskill’s reliance on information from Charlotte’s best friend, Ellen Nussey, a fellow “spinster,” who felt abandoned when Charlotte’s prospects for marriage became a reality.

With all the correspondence that abounds, Ms. James has done an excellent job of culling through the research and offering us another look at this fascinating family. James makes sense of the events of Charlotte’s life, tells a story that captures the language and feel of the times, and keeps the novel moving at a fast pace. While most of the dialogue in Charlotte’s Secret Diary is plausible, James sometimes goes a bit too far, such as her rendition of Charlotte’s wedding night. This portion adds to the romantic angle, but is the least convincing. Despite these few exceptions, James’ book is a captivating and entertaining read. James is so winning in her narrative style that by the end of the tale the reader will be convinced that she, in fact, has discovered Charlotte’s secret diary.

Quill says: A well-written, if somewhat romanticized version, of the life of Charlotte Bronte. A perfect summer read.