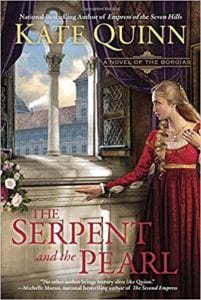 This great historical read is set in 1400’s Rome. The family Borgia was in complete charge at that time in Rome; they made sure that all knew it and followed their rules to the letter. The Borgia clan was not a group that you could mess with because corruption and murder were part of their family history.

As the story opens, there is a wedding about to start; the bride is Giulia Farnese and the groom, Orsino Orsini, whose mother is a cousin of Cardinal Borgia. After the wedding festivities the bride goes to her room to wait for her groom who never shows up. It seems that Orsino had made a deal with the Cardinal that he would give up his bride to the Cardinal and Giulia had to live in the house of her mother-in-law. The very next day Giulia was introduced to the Cardinal and became aware that she was going to be the Cardinal’s concubine because he wished it. The Cardinal wanted her for himself and he would hide his indiscretions with women by paying off and sending away the groom and keeping the bride for himself.

Obviously, back in that time, it was a fact that Rome was full of evil, corrupt people and each chapter in this book was devoted to another character. Guilia Farnese was the main character, followed by Carmelina who was the cook in the home of Madonna Adriana, Guilia’s mother-in-law. Of course, the Cardinal Borgia along with his various children were also jumping in and out of the story. There was a very likable character, Leonello, a dwarf, who worked as Guilia’s body guard. But, most of all, the story concentrated on the love story or lovemaking of the Cardinal and Guilia. When the present Pope, Pope Innocent, died, the most evil of all, Cardinal Borgia, became Pope Alexander VI, and was not a very nice person; evil, selfish and very cunning, he kept everyone in line.

This reader liked the book for the historical facts and did learn something but at times the book dragged a bit. The book was very well written and the descriptions of the castles, the horses, and all the pomp and circumstance of historical fact were detailed and accurate. It seemed to me that the activities were hard to believe and sometimes a bit humorous.

Quill says: The author definitely did thorough research but, on the other hand, it was slow reading at times. Certainly a ‘gem’ for history buffs.