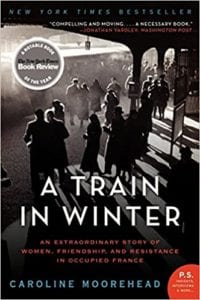 It has been many years since all the atrocities happened in Europe, and we have read story upon story of those times…but, they still have the ability and power to shock people to their very core.

I have always been an avid reader of the World War II genre, both fiction and non-fiction but, I have to say, that this book definitely lives up to its subtitle: A Story of Resistance, Friendship and Survival. I have forgotten many and reread many WWII books over time, but I will never forget this one. Even my soul was struck by the evil done, and the unbelievable courage that these women showed during such a dire situation.

The author begins by taking readers to the beginning of the occupation of Paris. The citizens are standing and watching the German soldiers march down the Champs-Elysees to the sounds of a military band. Both the soldiers, and the steeds that were pulling their cannons, were just a parade to the people. They were all dressed beautifully and ‘spit-polished’ to the maximum. After the Parisians watched the grand spectacle, they returned to their homes to ‘wait and see’ what Paris would become. But the ‘shiny’ spectacle that looked like a dream disappeared as the nightmare began, because the very speed with which the Germans took control was absolutely overwhelming to one and all.

There were courageous women in occupied France that joined the Resistance to help their families and countrymen get along under the German rule. They were of all ages and came from all walks of life. These women were not friends at the time; in fact, they did not know one another at all, but they shared true hate for their German rulers. As time passed, the Nazis/Gestapo found these women and put them into a prison in Paris, where they became friends despite the differences in their ages, classes, and lifestyles. Together, they found the strength to go on.

In January of 1943, they were sent by train to Auschwitz Concentration Camp. The oldest woman was 67, the youngest was just 17. The women numbered 230 when they left Paris, but by the time the Allies arrived to liberate them, there were only 49 who had survived the nightmare. Of course, even though the 49 were still alive, their lives after the war were mostly devoid of happiness, for there was no way to ever ‘shake’ off the hideousness of what they had lived through.

This author interviewed as many of these women as she could locate, utilizing archives to gather the rest of the information. This is a truly unforgettable book about a group of amazingly brave women, some of which survived Hitler’s hellish treatment. This historical journey does not only offer data and pictures, it offers an intense emotional ride from eye-witnesses who were embroiled every day in the worst locale that was ever created. One woman stated: Looking at me, one would think that I'm alive ... I'm not alive. I died in Auschwitz, but no one knows it. The words, the stories, the facts…everything about these women should be remembered for the rest of time.

Quill Says: A book that permeates the soul and reminds us all that wars do absolutely nothing but destroy innocent lives.