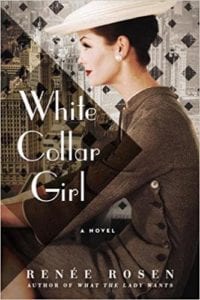 Jordan Walsh is a woman in the midst of a man’s world. She is Renee Rosen’s star character in her latest work of fiction: White Collar Girl.

Jordan Walsh has a tall order to fill. She comes from a family of reporters and wonders if she will manage to carry the baton forward as a revered reporter and add to the accomplishments of her family’s legacy. As she rides the elevator up to the buzz and chaos of the Chicago Tribune newsroom for her first day, her palms are sweaty and her thoughts scattered. Was she excited, nervous—or both? When the ding of the elevator doors snap her back to the moment, she realizes now or never has arrived.

Her father had been a correspondent during World War II and prior to that, the Spanish Civil War—alongside Ernest Hemmingway of all people! Her mother was the daughter of a newspaperman during the war in Europe. Jordan’s brother, Eliot (named after her mother’s favorite poet, T.S. Eliot), had worked for the Tribune’s competitor: the Sun-Times. As she steps into the maze of desks with overflowing ashtrays and the staccato of typewriters, Jordan, receives her first dose of reality upon meeting with her supervisor. There will be no chasing down the bad guys for the proverbial ‘scoop.’ There will be no by-line on the front page. Rather, she will be the newest member of the ‘sob sisters’ and own (and know) her place. It is age-old and subliminally understood: men chase down the leads and write the sensational stories. Women write about fashion and recipes. This may have been the formula the Tribune presses had run on for many decades, but the Tribune never had a Jordan Walsh around to change up what was supposedly tried and true.

Rosen takes the reader back to a time when women knew their place was in the home—rearing children and preparing dinner for their bread-winning man. The place is Chicago and the time is during the mobbed-up Daley years. Ms. Rosen paints a fascinating picture of what it must have been like to actually report the news versus today’s standards of ‘opinionating’ it. Her main character, Jordan Walsh, is a heroine personified in that she breaks the mold and blazes the trail; leaving ‘the little lady’ in her wake and introducing the fearless woman about to re-write the script. There is a tangible glory and electricity that surges in the way Rosen plays out the story with the backdrop of an iconic newspaper. Ms. Rosen creates connection by establishing scenes filled with great props be it overflowing ashtrays or the sound of the constant clickety clack of electric typewriters—all fueled with the momentum of reporters accurately capturing the almighty ‘scoop.’ Ms. Rosen resurrects the respectability of what it must have been like to report the news and do so without personal bias and political correctness and emphasizes the sacred covenant of protecting the source no matter what. Simply put, Ms. Rosen has nailed a terrific story that will surely have her audience throwing sparks given the speed they assume at the turn of each page. I’ve had the pleasure of reading former works written by Ms. Rosen and once again, she does not disappoint!

Quill says: White Collar Girl may be fiction, but it sure pays homage to what it meant to report the news and do so honorably!