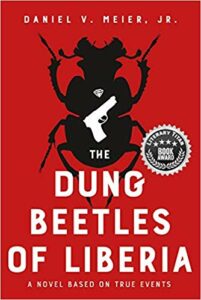 As The Dung Beetles of Liberia opens, the reader is transported to 1961 where we meet nineteen-year-old Ken Verrier who finds himself at a major crossroads in his young life. He’s in his second year of school at Cornell University, and although he is doing fairly well in his studies, he is far from satisfied with his education and future as a physicist.

Ken yearns to get away, not only from the brutal winters in upstate New York, but to escape a world that has recently faltered due to the death of his brother. He informs his equally shocked parents and girlfriend of his decision, and thanks to a few connections his father has, he obtains a visa and employment as a pilot for an air transport operation in Liberia, West Africa.

A few days later, Ken lands in Liberia, begins his job, and is thrown into a new world that is drastically and often disturbingly dissimilar to what he was used to in America. While he expects this country to be a great match for his future endeavors, thinking he’ll do well because Liberia is reportedly a rich and prosperous country, he quickly comes face-to-face with the stark and brutal realities of life in West Africa. The few rich people have a strong grip and power over the poor masses, and everyone, regardless of economic status, appears to have no regard for ethics or morals as they scratch their way to the top or merely cling onto anything for survival. Ken is also exposed to a motley crew of people, including a few foreigners, particularly paranoid ex-Nazis, political dignitaries, international businessmen, local tribesmen, and even the Peace Corps, who all seem to have a similar agenda, to squeeze the most possible out of the land and the people, at any cost.

The Dung Beetles of Liberia follows the main character from a naive young man escaping the demons of his past, through his years of living and working in Liberia. His time in Liberia is filled with heart-pounding tales of often narrowly escaping sudden disaster and sometimes humorous bits of his escapades that takes readers on a wild adventure, making one feel as if they are right there in the seat next to Ken. But will Ken Verrier become a changed man, getting sucked into the endless corruption that is now a part of his life, or will he manage to escape the evils that surround him and maintain his integrity throughout his time in Liberia?

Readers should note that The Dung Beetles of Liberia may appear to be a memoir, but as it states on the cover, it is a “novel based on true events.” It is much more than a simple accounting of a life spent in West Africa, it is a story about a young white man’s coming-of-age, set in the backdrop of a real country experiencing a tumultuous time in their history. In fact, the author has created a unique blend of memoir and historical fiction that will capture your attention from the beginning, and fly you through the pages until the very end. While the writing is polished and flows well, some of the characters’ development could be a bit more fleshed out. In particular, this reader felt that Ken Verrier’s girlfriend needed something more substantial, and was left dangling at the end of her part in the story. However, with that said, this novel, because of its excellent writing, likable characters, and a riveting, page-turning story-line should not be missed by anyone.

Quill says: The Dung Beetles of Liberia is not only an engaging read, but an eye-opening education on life in 1960's Liberia as experienced by a young American pilot.

For more information on The Dung Beetles of Liberia, please visit the author's website at danielmeierauthor.com