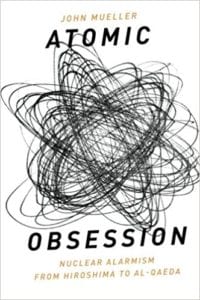 Atomic Obsession by John Mueller is controversial. Mueller argues that conventional wisdom overstates the effects and usefulness of nuclear weapons. While he concedes that even a single detonation would be a terrible event, he pointedly states that we tend to blow the ultimate effects of such a blast out of proportion. Mueller starts with an in-depth analysis of the effects (blast, radiation, EMP etc.) of a nuclear explosion and, using data from Hiroshima and Nagasaki, lays out what might be expected should a similar device be used once again. He goes on to explore the reasons for overstating the efficacy of atomic weapons and then delineates the consequences of such overstatement.

Of particular note is Mueller’s section on whether or not nuclear weapons truly prevented a third world war. Mueller posits that the horror of the first two world wars, including many heads of state’s direct experience of the conflagrations are the real reasons that WWIII has not happened.

Although Atomic Obsession, as stated earlier, is well written, it is not a “comfortable” read. Long and deeply held assumptions will be challenged and the reader will be presented with well-reasoned arguments, supported by historical data.

Of particular relevance for today will be Mueller’s analysis of nuclear proliferation and the potential for terrorist organizations to use such weapons. In light of current nuclear issues with Iran and North Korea, this information is both fresh and insightful. Most of all, Mueller will force the reader to examine beliefs and assumptions that may be unfounded. It is important to read Atomic Obsession with an open mind and constantly question what we say and think about Atomic weapons.

Quill says: Prepare to have your assumptions about atomic weapons challenged.