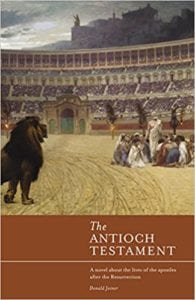 To begin my review, I’d like to play a little guessing game: “What happened after the most important event in Christian history?” That event would be, obviously, the life, death and resurrection of Jesus, and what might the answer entail? Perhaps what might have happened to Christ’s Apostles and how they spread THE WORD.

The Antioch Testament takes the reader to the year 2004, where a US Army patrol, stationed in Iraq, comes across a group of Iraqi Christians who are in the process of fleeing from Islamic fighters. The leader of the Iraqis is a priest who has life-threatening injuries. The priest is insistent that he hand over a bundle he carries to the military chaplain (and only to the chaplain). When that chaplain, Charles Monroe, opens the bundle he sees that it contains an ancient manuscript that is written in an old, unknown language. Because the Chaplain is worried about keeping it in Iraq, where Christians are being targeted and anything ‘Christian’ is at risk of being destroyed, he decides to have it sent back to the United States for safe keeping (to his hometown of Augusta, GA). Eventually the manuscript ends up in an Eastern Orthodox Monastery where a group of scholars begin to translate it.

As the scholars set to work, they soon discover that the manuscript is a firsthand, first century AD memorial in the Aramaic language (which was the language that Jesus spoke), telling of what happened to the Apostles after the Resurrection of Jesus. It tells of the Apostles' lives, where they went and how they died. Readers will learn that the Apostles were ordinary, hard-working men who were given an amazing task by Christ. They would be a part of calling out to the world, including the mighty Roman Empire, to repent, and turn to the faith of the risen Christ.

As the researchers continue their work, they are unaware that time is of the essence. A zealous Iraqi rebel organization is determined to find the manuscript and destroy it before all the secrets contained within the manuscript are exposed. And those Iraqi rebels believe that some of those secrets are definitely worth killing for. While the translation is in progress, the Iraqi’s who are terrorizing the Americans learn where the documents are located...and are determined to recover them and return to Iraq, and destroy everything and everyone in their way, if necessary.

For history buffs, this work of fiction is certainly interesting, offering a new path in the Christian realm. Following the lives of the Apostles kept me turning the pages although if you're looking for a book that is primarily a mystery/thriller, this may not satisfy. The bulk of the narrative is about Christ and the Apostles, not the 'bad guys' pursuing the manuscript. But again, for history buffs, The Antioch Testament will keep you engaged.

Quill says: Not as much a mystery/thriller, but for fans of Christian historical fiction, The Antioch Testament will be an enjoyable read.