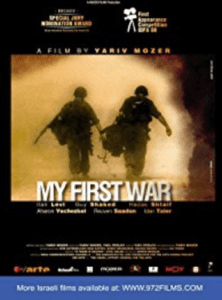 The Hezbollah began firing missiles at Israel's border towns. Soon reserve troops were called up and Lt. Colonel Ilan Levi, quickly deployed his troops into the field in what would be known as the Second Lebanon War (Milhemet Levanon HaShniya). These thirty-four days of hell would beckon to the young men of Israel, who would quickly ask themselves, "Who are the victims?" Yariv Mozer had been drafted and began to film, not only the conflict, but the emotions of men and women who were caught up in this madness. The silence was mixed with the sound of explosions and as they put on their helmets, one young man claimed, "We do have fear. We do." The rockets were "falling endlessly." Yuri's camera lens was speckled with dirt, but it did not fall to the ground because he had hung it around his neck. Yuri Mozer was twenty-eight-years-old and it was his first war.

Yuri had often enjoyed war movies, but this was something altogether unreal when he found himself serving as real live armament officer. It was considered bad luck to film and one young man sternly shooed him away. Men felt they were nothing but "exposed targets" as the Hezbollah aimed their Katyusha rockets at them. The "beautiful northern region" had turned into a hell, but a mere two hours away in Yuri's hometown there seemed to be nothing amiss. A woman's voice cried out over the radio, "This is a very harsh sight...I have no words." Hadas Shtaif's voice soon became synonymous with the war. She cried at night for her son who was also serving. The chaos increased, the men felt betrayed and duped. They were being jerked around. They were crossing into Lebanon...they were being used. "Trach, trach, trach..." the missiles continued to pummel them. When would the horror end? Who would make it out alive? Would these young men ever be the same?

This was a stunning, sobering documentary about the Second Lebanon War, sometimes known as the Israel-Hezbollah War. Yuri encounters and films many men during and after the conflict. The voices of these men are haunting, a haunting that did not stop with the cease-fire. The men themselves examine their lives and participation in the war. There are several that stand out and made me swallow and pause to think a few times. The commander, the man who lost his "favorite cousin," and those who felt betrayed all had poignant stories to tell. Their voices are in Hebrew (subtitled), but the narration is in English. I had no problem or difficulty following.

Quill says: My First War, about an "unnecessary war," is mesmerizing, simply mesmerizing and there are few words to impart how stunning and important this documentary truly is.