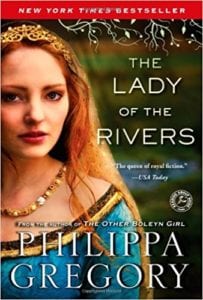 When she was a young child Jacquette realized that she could sometimes predict the future. Visiting her Uncle, Lord John of Luxembourg in the year 1430, she meets his prisoner, Joan of Arc, and sees that Joan has special powers. It was said the Joan was a witch and that is why she was able to lead armies into battle. Jacquetta has been told that she is descended from Malusina, the river goddess and she hears music when something is about to happen (good or bad) in her life and the lives of those close to her. She and Joan form a bond sharing mysteries of the Tarot and Wheel of Fortune before Joan is taken to England to suffer death at the hands of the English Royalty ruling France at that time.

Eventually, Jacquetta is married to the much older Duke of Bedford, who is the English Regent of France. He has heard of her gift of second sight and introduces her to a world of education, which was not exactly the forte of women in this era. Jacquette was also introduced to alchemists working for the Duke. When the Duke passes away he leaves Jacquetta a very wealthy widow. Her only friend turns out to be Richard Woodville, the Duke's squire, who is at Jacquetta's side when her husband dies. The two fall in love and marry without the knowledge of the King, which is a no-no, for the King has to approve all royal marriages. They are fined and sent away from the Court of King Henry VI but are welcomed back eventually and Jacquetta becomes the Queen's closest confidante.

The Woodvilles soon become friends of the Court although Jacquetta, in between childbearing (11 children), senses the growing threat from the royal rivals (Lancaster and York). The House of Lancaster tries to keep the Court intact but, the House of York want the throne and, during all this, the King is taken ill. Queen Margaret turns to untrustworthy people for help and the Duke of York threatens to overturn the kingdom. Jacquetta and her husband fight for the King and Queen and for their daughter Elizabeth Woodville. Jacquetta has foreseen a fabulous life for Elizabeth including a fortune and maybe the throne of England sometime in the future.

This author is an acclaimed writer of British History. The Lady of the Rivers is another about the Lancasters and the Yorks who were both after the throne of England. These people were all related to each other as the readers can see when the family trees are printed. But, Ms. Gregory is a master storyteller and Elizabeth Woodville is the heroine who will become Queen when everything is figured out. This is a powerful story which is very passionate and as the author tells the legendary story of Jacquetta and Elizabeth Woodville the reader will become enthralled with the story of the Lady of the Rivers.

Quill Says: This author is well-known in the field of English History. This book is part of a series called The Cousins' War, featuring the Plantagenets and tells of the Wars of the Roses, a very violent time in the history of the English Royals.