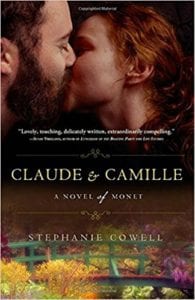 From La Bohème to Rent, we love melodramatic stories about starving artists, poets, and composers. We never get enough of soulful young men and the girls who adore them struggling to live la vie Bohème. They grab our hearts. The clichés all arise from the second half of the 19th century, of course, and a century and a half later, the paintings they sold for a pittance (or failed to sell at all) now sell for millions of dollars. Where’s the justice in that? Artists will tell you there is no proper reward for what they do, especially while they’re alive. It seems that you have to be dead for at least a century to be famous.

Stephanie Cowell’s new novel, Claude & Camille, is based on the life of Claude Monet, whose 1872 painting Impression: soleil levant (Impression: Sunrise) gave a name (at first critical, only later laudatory) to the school of art he and his buddies—Bazille, Renoir, Pissarro, Manet, Cézanne, et al.—created in the 1860s and ’70s. Monet (1840–1926) came from a proper bourgeois family that expected him to take over his father’s shop. Instead, he started drawing caricatures in chalk, then was invited by an older artist, Eugène Boudin, to meet him at dawn to paint outdoors. It’s the outdoors part that is revolutionary; until that time, nearly all painting was done in a studio or the patron’s residence. Plein-air landscape painting was nearly unknown, and because the young men broke the rules of academic painting, their works were almost never accepted by the Salon in Paris. But the soon-to-be impressionists soldiered on, devoting their lives to their art and going into debt to buy paint and canvas. Cowell opens each chapter with an epigraph taken from the actual words of the artists. “We were all one group when we started out,” said Renoir. “We stood shoulder to shoulder and we encouraged each other” (p. 60). Impressionist art, of course, soon inspired impressionist music (Debussy, Ravel, Vaughan Williams, et al.) and impressionist literature (Baudelaire, Rimbaud, Woolf, et al.).

In the novel, as in his life, Monet moves to Paris, where he meets a girl named Camille Doncieux. Their story is easy to summarize: they fall in love, she gets pregnant, they live together in one shabby house after another, Claude keeps painting, they get married, and Camille dies too young, either (as the novel tells us) of cancer or (as the Wikipedia article says) of tuberculosis. It’s la vie Bohème, and in a novel the life is grand and romantic. In real life, it’s poor and dreadful. Cowell does not, of course, downplay the stresses, jealousies, and miseries of their lives. That’s what makes for good drama. But as we see Camille wanting to be an actress but not actually trying out, wanting to write a novel but burning it, and inventing her history, we begin to wonder about her mental health. Although almost nothing is known about her biography, in the novel she seems almost schizophrenic. She and Claude love each other, yes, but it’s a stormy relationship filled with deceit on her part and jealousy on his. It’s a good story, but it’s not a happy story. They are forever quarreling:

His voice rose. “Go away then…. Leave me alone! Take our son and go live with your sister and her officious husband…! And then your mother and father, whom you fled from, will visit you! … Minou [his pet name for her], all the things you thought about me, all the bright, wonderful things, are wrong.”

He gave her a last bitter look and without taking his coat, stormed out into the night.

He walked so fast the air parted before him, as if afraid to hold him back. But where am I going? he thought bitterly. Away from her, away from them, away from my romantic foolishness, the idiot I’ve become...

He walked for hours. Normally he felt such a part of this city, but now he felt all alone. How bitterly he regretted the words he had spoken! Well, it was her fault (pp. 183-84).

Hungry artists are forever seeking commissions that will pay them enough to live. Monet has a stroke of luck when he’s hired by a businessman named Ernest Hoschedé. The deal is that he will spend weekdays painting at the Hoschedé estate and go home to Camille on weekends. While he’s painting, however, he falls in love with Alice Hoschedé, and when her husband’s business fails, Claude invites Alice and her six children to live with him, Camille, and their two children. It’s a very large ménage á trois, but it was children of both of Claude’s wives who preserved his paintings and the estate at Giverny.

Readers who want to see Claude’s beautiful paintings of Camille and his early landscapes, most of which are mentioned in the novel, can go to Wikipedia, where they are reproduced.

Quill says: La vie Bohème makes for a terrific story. Cowell brings these artists to life in the days before they were established and famous. Be sure to look at their paintings, too