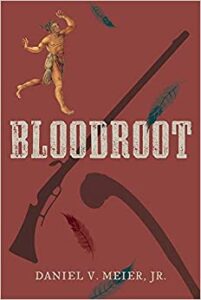 The story begins in England in the early part of the 17th century. British citizens are being bedazzled by elaborate tales of a promised utopia, over in the New World, filled with vast amounts of land and gold. The land in this utopia is just waiting to be taken by anyone willing to sail across the ocean and assist in the beginnings of a settlement in Jamestown, Virginia.

Bloodroot follows two of these pioneers, Matthew, a carpenter’s apprentice, and his friend, Richard, each with their own personal reasons for leaving their homeland, decide to brave the rough waters and join in the establishment of a new town, all in hopes of obtaining prosperity beyond their wildest dreams. Unfortunately, the organizations running the ships between England and Jamestown fail to inform their potential passengers of a few important facts: necessary supplies are short and in high demand, the weather is vastly unlike anything anyone has experienced in England, and most critically significant is that Indian tribes are outraged by the British intruders, and are quite willing to fight to protect their land.

The two friends do their best to establish themselves in this wild new land with Matthew having an easier time than his friend. This is because he’s quickly chosen by the leaders to assist in important duties such as the construction of housing, while Richard, because of his good nature and overall naivety, struggles to fit in. Over time, though, he quickly falls in love, marries and begins to build a life with his new bride Anne. However, life in this fledgling colony proves to be anything but a paradise filled with riches. The colonist’s daily strife quickly worsens and descends into bloody chaos when their captain is accidentally injured and must return to England, leaving the colonists feuding over not only power, but the desire to discover the elusive gold in nearby lands. Further devastation arises when Indians manage to get into their unguarded lands, killing people and destroying their food supplies, throwing them into a desperate starvation mode. Matters couldn’t possibly be worse for anyone, including the two friends, who are now also dealing with their own devastating issue. An issue that will destroy their friendship and cause Matthew to become fraught with guilt, depression, and desperation.

Meier’s Bloodroot is a raw, emotional, and vividly depicted novel set during a time that, while it may be quite foreign to us in the 21st century, is so well-written and researched, that you feel as if you're actually living in 17th century Jamestown. The author has not only written a historically accurate novel, but has also expertly woven a page-turning fictional tale that easily rivals others in the historical fiction category. Laced throughout this intense tale are complex, believable characters, and a plot that captures your attention from the beginning, and leaves you thinking about many scenes well after you’ve finished reading. Finally, it should be briefly noted that the author provides a glossary of terms in the back of the book (that might otherwise go unnoticed until the end) that may enhance your reading journey.

Quill says: Reading Bloodroot is an intense look into the lives of early Jamestown settlers, and a thoroughly enjoyable read.

For more information on Bloodroot, please visit the author's website at: danielmeierauthor.com