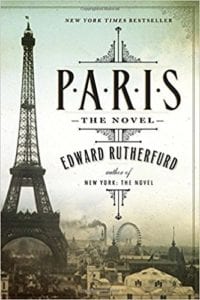 This author has become the one and only when it comes to epic novels. His new novel called Paris is his latest gem. This book covers many years (700) of one of the most talked about cities in the world. The reader is privy to the culture and architecture; everything from the building of the Statue of Liberty which was sent to New York City as a gift from France and on to the Eiffel Tower, which is an amazing story by itself, a constant march through society, geographic places and history of the city of Paris.

The story picks up in the year 1261 with the building of Notre Dame Cathedral and ending in the late 1960’s after all the wars that France was involved in came to a close. The reader is treated to the lives of the people who grew up, had families, fought in wars, and built the beautiful city of Paris. The novel goes into many historical scenes that occurred in the City of Light over the centuries. There are many different types of folks and their descendants who meet and mingle with each other whether they want to or not. We meet members of the aristocratic de Cygnes family; the Le Sourd family and the Gascon family who are members of the working class. As an example, one of the sons of the Gascon family helped build the Statue of Liberty and the Eiffel Tower. The Blanchard family, who are very rich, do not associate with aristocrats unless they are selling them something and they are never seen 'hob-nobbing' with the working class.

The author’s writing is first class, as always, and the stories that he tells of the people of Paris are fascinating. This reader has read a lot of history but was still amazed by some of the things that took place. An example would be the building of the Eiffel Tower. Even with all the modern equipment that is used today, I was astonished at how they put this very large tower together with the means that they had to work with at the time the Tower was built. The author presents us with timelines for each family and the topics that are covered by each are really important. There are chapters about the French Revolution that started out full of dreams to end up in terror; the expectations of the socialists that led into despair as the Nazis marched into Paris in 1940, bringing into being another reign of terror.

As in any city with a lot of historical facts, including many monuments, and when fortunes are won and lost, such a topic would be a difficult book for any author to conquer but Edward Rutherfurd does not disappoint. Taking into consideration his classic research and writing, the author brings these families, with all their problems and dreams to the forefront for all to see.

Quill says: Readers who have never seen Paris will think they are sitting in the middle of it. A wonderful read!!!!