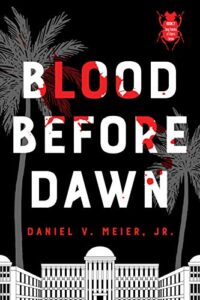 Deep in the West African country of Liberia, where corruption and unrest reign supreme, author Daniel V. Meier Jr. returns with another riveting story in The Dung Beetles of Liberia series, Blood Before Dawn.

It’s 1979, and twelve years have passed since Ken Verrier left Liberia and returned to America where he settled, with his wife, Sam. Together, they decide to return to Liberia, but only for a short time, to make a quick chunk of cash by purchasing (and then selling) diamonds that will eventually assist Ken in his private airline endeavor. It all seemed to be an easy and quick idea, so it came as a major shock to them when they got caught in the middle of an angry mob on their second day of their trip. Little did Ken and Sam know that they had just returned to the country in the middle of extreme political unrest. One of President Tolbert’s cabinet members raised taxes on rice, which in turn caused rioting by the common people. Things manage to settle down for a while after the president agrees to lower the tax (but he remains despised by most of his country), and Ken gets talked into remaining in the country a little longer than planned to assist an old friend in managing his private aircraft company. However, tensions between President Tolbert and his administration continue to churn and fester amongst the citizens ultimately leading to a bloody coup. But will Ken and Sam be able to leave the country before getting permanently caught in this horrific uprising, or is it too late?

Daniel V. Meier, Jr. has written another compelling historical fiction narrative in Blood Before Dawn. Readers hit the ground running in the beginning scenes (along with the main characters, much to their horror) while the suspenseful, and harrowing story of the corrupt political environment and unrest in Liberia unfolds and doesn’t subside until the shockingly messy conclusion.

It is evident that the author is a master of writing in the historical fiction genre, whether he is spinning a tale partly from his personal experiences as seen in this series, or with his other equally engaging historical fiction works. Readers are not just told a wild, fictional story that might have some basis in history, but they’re presented with an entertaining story expertly woven throughout real events in the tumultuous history of Liberia.

After reading a plethora of books over the years, this reviewer considers a story to be of great quality when, not only do the characters and storyline remain in my mind long after its conclusion, and my subsequent journey onto another book, but when a story inspires me to do further research into the subjects, events and characters presented. Blood Before Dawn is exactly that kind of novel; it will not only linger in your thoughts, but it also has the potential to awaken your thirst for knowledge.

Quill says: Blood Before Dawn packs intense page-turning storytelling with a brutally true account of Liberia’s history, and together produces one great read.

For more information on Blood Before Dawn (The Dung Beetles of Liberia, Book 2), please visit the author's website at: danielmeierauthor.com