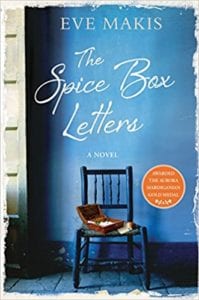 Eve Makis takes her audience on a journey of rich family history in her latest novel, The Spice Box Letters.

Katerina’s grandmother (Mariam) has passed. When Katerina’s mother gifts her mother’s ornate spice box to Katerina, little did Katerina know she was about to embark upon a journey that would transcend from Cyprus to New York in order to learn the many facets (and secrets) of her dearly departed grandmother. Raised in England, Katerina sets out on holiday to Larnaca, Cyprus with her girlfriend Jenny. All of the letters and diary contained in the spice box were written in Armenian and sadly, Katerina had never learned the language of her heritage. While on holiday, Katerina meets a boy, Ara, and challenges him: "...I didn’t catch your name," he says. "Katerina. And yours?" "I’m Ara." "That doesn't sound Greek." "It's not. I’m Armenian..." Suddenly, this happenstance meeting is more than a sign for Katerina. Perhaps she has found her translator for her grandmother’s letters.

As time unfolds, Katerina and Ara spend more time together as they pour over the letters and the pages of her grandmother’s diary. Even though her grandmother survived the Armenian genocide of 1915, her survival came at a grave expense. She was separated from her beloved brother Gabriel when she was exiled from her home in Turkey. The road ahead was compounded with further grief when she lost her first love. As Katerina and Ara continue to read her grandmother’s diary, it would seem miracles truly can happen as much for those in the present as those who are now memories from the past.

Eve Makis delivers a bittersweet story that ties a family’s past tragedies to the present. There is a sense of warmth in the contrasts she portrays between Katerina’s present day life and the horrors of her grandmother’s exposure (and survival) of the Armenian Genocide decades before. Even though this is a novel, I applaud Ms. Makis for the specific historical events she weaves throughout this story when it comes to the nuance of families and their history. I found myself often wondering what my own familial history would uncover should I explore its past at some point. Her characters are not over the top heroes nor are they martyrs. Rather, she has breathed a credible life into each of them; complemented by dialogue that flows. This is a story that certainly has its moments of tragedy, but the overall tone is one of hope. Well done Ms. Makis. I look forward to your next novel.

Quill says: The Spice Box Letters is a wonderful novel that accomplishes tying the past to the present with a heartwarming theme of hope throughout the story.