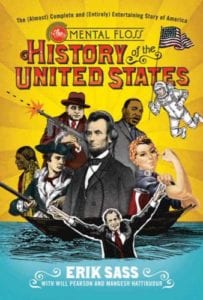 History textbooks can be so dry and dull; page after page of names, dates, and events, with little additional text to spice things up. A person’s eyes can glaze over in boredom. Add to that the fact that so many of today’s students know painfully little about their own country’s history, and you can see that there is a need to get historical facts into the hands (and heads!) of today’s readers. Enter Erik Sass and the Mental Floss series. Together they take an irreverent romp through the history of the United States, which will keep readers reading and educate them at the same time.

The Mental Floss History of the United States takes the reader from 23,000 BCE (yes, really) through 2010. While there’s not a lot of “stuff” happening during those early years, it nonetheless offers a glimpse of the country’s pre-history.

The bulk of this book covers historical events that we should all be familiar with, from Columbus to President Obama. The author, however, includes a plethora of little know facts about many of these events. For example, did you know that two of our presidents were indentured servants, that by 1914 eugenics laws had been passed in 14 states, and that Benjamin Franklin's kite was made of a silk handkerchief stretched across a cedar crosspiece?

While traditional history books tend to be big, glossy (and heavy!) tomes, this one is much lighter but has no full-color photos to liven things up. For that matter, there are no photos in this book, just some drawings and charts spattered throughout. What it does have is a lot of historical facts, covered in fairly brief (typically one to three pages) articles, to keep in sync with today’s short attention spans. Combine that with the author’s tongue-in-check way of explaining things, with a hefty dose of humor, and young readers should find learning history a, relatively, fun experience.

To dress things up a bit, this text has a lot of blue blocked boxes, with interesting facts, quotes, and tidbits. “By The Numbers” and “What Happened When” breaks down various topics into easily digestible factoids while many topics are introduced by a lie, ex., “America defeated Nazi Germany with help from its pluck British sidekick,” followed by “The Truth: The Soviet Union defeated Hitler – pretty much by itself...by the time the United States joined the effort, the Soviet Union had already done most of the work” (pg. 236) followed by a detailed explanation of the truth. There are also profiles of numerous historical figures as well as all 44 presidents.

There are a few areas where I found myself disagreeing with the author. For example, while discussing President Clinton’s Welfare Reform Bill, he notes that Clinton and the Republican congress that passed the bill took credit for the welfare rolls dropping from 14.4 million recipients to just 4.1 million in twelve years. Sass argues that “…the number dropped primarily thanks to economic growth, which picked up halfway through Clinton’s first term. This fortunate coincidence…” (pg. 360) Clinton’s supporters may wish to give more credit to their favorite president. These are small quibbles, however, which I believe actually give more credence to this book. It was so well written and enjoyable to read that I did, in fact, read it, absorb it, and found myself debating with the book.

Quill says: An excellent, and fun way, to learn about history, whether you’re a high school student or a “history challenged” adult.