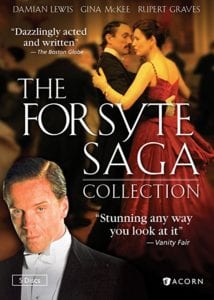 When Jane Austen and the world of technology came together in the 20th century it was exciting. Why? Because with the invention of movies, television and then, DVD’s, a true reader could actually watch a perfect piece of literature come to life on the screen. Whether or not you like the book or the movie better is neither here nor there, what matters is that the characters enter your household and leave a lasting imprint on your imagination. THIS is The Forsyte Saga. THIS is yet another amazing gift for readers to watch and learn all about the pride, wealth and ups-and-downs of societal Britain during some of the most turbulent times in history.

The story truly wraps around the character of Soames Forsyte. This is a man who represents the higher echelon of society and loves the 1800’s London world. He’s a man of property who sees his future in the form of the lovely Irene – who he begins to pursue like a hungry lion chasing after a doe with only marriage in mind. Irene is not really fond of Soames, but when her stepmother tells her they will soon be destitute, Irene approaches Soames and accepts his proposal.

Now the Forsyte clan is beyond wealthy, and Soames is the manager of all that wealth who demands that the family be respectable. Soon they are celebrating the engagement of June Forsyte, daughter of Jolyon; Jolyon was cast out of the family for leaving his wife and running away with the governess (a major slip-up, which made Soames put him on the ‘out’ list). June's fiancé is a young architect named, Philip Bosinney. When June introduces Philip to her relatives, she singles out Irene, whom she has become very friendly with. What she doesn’t realize is that Irene is looking for love – real love. Soames treats Irene as yet another piece of property instead of a soulmate (even though he is completely in love and obsessed with her). So the ALWAYS unhappy Irene decides to begin a love affair with June’s prospective groom and, to make matters even worse, the independent outcast, Jolyon, comes back into the picture.

These situations get everyone into a mess as Soames’ ownership of Irene spawns a horrific moment that results in Irene running away and separating from Soames for the next ten years. Soames wants a child and truly wanted that child from Irene, so he tries to get her back into his life. What happens? He drives her into the arms of another family member.

What goes around comes around, so to speak, and Irene bears a son while Soames sires a daughter. And this son and daughter end up falling for one another, yet their parents won’t allow them to be together because of the awful secret that the family holds. The daughter’s name is Fleur, and she is JUST like her father. A Daddy’s girl through and through, she will not be told that she can’t have the man she wants and throws herself into the love affair body and soul.

This story runs from the Victorian era straight into the beginning of the 1920’s. The changes in the world make Soames shudder at times. From women’s rights to allowing them to ride horses in the Park to motorcars that fill the skies with black smoke – these are issues that Soames despises. He wants to bring back the good old days when respect and wealth went hand-in-hand. Not to mention keep his beloved daughter far away from Irene’s son.

This is the beginning of Galsworthy’s saga about the Forsyte family. This first trilogy opened the door for him to write two more, which showed how the later generations dealt with the wars, financial problems, lost loves and changes in the world. This is a classic story; extremely well written and amazingly well acted. You’ll get emotionally involved with the characters – hating them one minute and loving them the next. Galsworthy’s words put the modern love stories to shame proving, once again, that we need more of these tales and far less of the ‘fanged and furry’ ones.

Quill Says: This is a definite keeper that will be watched over and over again. Hopefully the next two trilogies will be filmed very soon because the books were truly phenomenal!