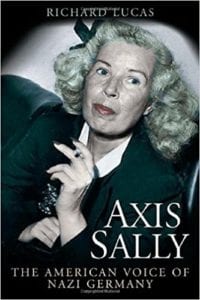 Mildred left the shores of the US in 1934, when people still believed very much in isolationism. She preached those views in her broadcasts when she was hired by Berlin Radio to b a commentator. The President of the US, Franklin D. Roosevelt, seemed to change the politics of America and, after all of Adolf Hitler’s broken promises and hatred toward non-Aryan races, the US was eager to go against the Facist governments and end the Facist rule in Europe. Mildred, not being in the United States for some time, believed that she could still love America but, stand up for the beliefs of her fiancé, - a man who she respected. On December 7, 1941, when America entered the war the tide turned, and Mildred believed that she could still love her home country but also do her job on Reichsradio.

In 1939, at the beginning of the war in Europe, Mildred had been residing in Germany for five years. After many failures in New York in her chosen career as an actress, she wanted to get married and live in Germany. When the Americans living there were ordered to leave the country she stayed, and in the year 1940, she was hired by German Overseas Radio where she went from being a disc jockey to the most talked-about propagandist in the country. She became involved with a married man, Max Koischwicz, and under his direction became Axis Sally, the voice of the Nazi government who spoke to the American GIs and their families.

She peppered her broadcasts with music, using the song Lili Marlene as a theme for her programs. Her calm and gentle voice mocked the GIs, telling them that their wives and girlfriends were being unfaithful back home and also telling them about the horrible things that awaited them on the foreign battlefields. Using people from the German military, she seemed to know where these boys were and what they were doing at all times. Also, she knew some of their names and would send messages to their families about the wounds they received in battle, describing them in living color.

Mildred’s fiancé passed away in 1944, but she stayed in Berlin up to the end of the war broadcasting. She was extremely frightened at the end of the war as Berlin was full of Russian military that were not at all happy with her broadcasts. She tried to pose as a refugee but the US authorities found her as she was at the top of their list of traitors, and brought her back to the United States for trial. Then President Harry S. Truman, wanted to make an example of her for treason and the damage she had caused GIs and their families. After her trial, she was sent to prison. Following prison she was paroled to a convent in Ohio where she attempted to make amends to the country that she had deceived.

Quill Says: The author did a great deal of research and did it well. This was not an easy book to write, I’m sure. The media still can do a great job of making and breaking anyone they want to go after. It makes you wonder how Axis Sally would do today spreading her stories through the media.