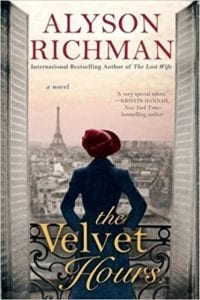 Alyson Richman’s takes the reader on a delicious journey back in time and delivers an intricate tale of the true account of an abandoned Parisian apartment that survived the German occupation in her newest book, The Velvet Hours.

Nineteen-year-old Solange Beaugiron and her alchemist father Henri are all each other have as they live their lives in the quiet and unsuspecting surroundings of Montmartre, France. Europe is on the brink of disaster with the escalation and prospect of German occupation. It is time for Henri to enlighten Solange of a person from his past. Marthe de Florian is his biological mother, but that is as far as the intimacies of mother and child go. She gave him up at birth and while Henri learned the truth when he was eighteen, the years had managed to dissuade any further sense of connection between the two. Perhaps with time, there is a measure of healing and Henri decides it is time for his only child to meet this mysterious woman (her grandmother) who abandoned him so many years before.

Marthe de Florian hadn’t begun life as de Florian. She was a seamstress and one day followed the next without much fanfare. Marthe believed she was destined for far more in life. She left her life as a seamstress behind and answered the call of the theatre for her reinvention. Lovely and captivating, she catches the eye of the mysterious and quite handsome Charles. He is clearly wealthy and as time unfolds, she learns he is married. No matter, Charles wasn’t the only wealthy men to have a woman to keep outside the confines of marital bliss. Charles lavishes Marthe with gifts and finery. By the time Solange enters Marthe’s life, Charles has passed. She and her faithful servant Giselle are reclusive companions in her grandiose apartment. Solange is curious about this mystery grandmother she never knew she had. With the German occupation rapidly becoming reality, Henri is called up to support the effort at the front. He closes up their home and arranges for Solange to move in with Marthe. As the war advances, Solange and Marthe discover the hidden treasures that can surface through the tragedies life has a way of delivering.

Alyson Richman deserves great praise for penning such an historically rich and splendid tale. Her precise flair toward capturing the essence and accuracy of the German invasion and occupancy of France is absolutely fascinating. At book’s end, she pens a fascinating account of what inspired her to write this story. While there is ample fact woven into the history of the characters portrayed, her embellishment to solidify the facts is seamless and lends beautiful authenticity to the overarching story. She is a master storyteller indeed. Her characters are quite credible and the dialogue will have the reader often experiencing a sense they too are in the scene as the conversation unfolds. This is the signature of a writer who is connected with the words she places. There is no real estate wasted across the pages of this novel. It is captivating, engaging and will certainly leave her audience with one desire at the proverbial end: may I have another, please? Well done Ms. Richman!

Quill says: The Velvet Hours is an epic journey of delicious story and fascinating history — a must read!