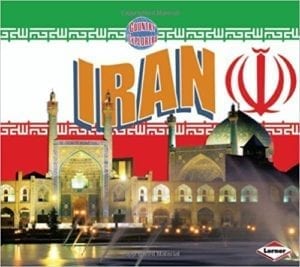 If you look at a map of southwestern Asia, you will find Iran, a country that is surrounded by several countries and bordered by "three bodies of water." The landscape is varied with everything from mountains, plateaus, deserts to lowlands. If you were to visit the central part of the country where the Plateau of Iran is located you would have to endure almost unbearable temperatures that can reach upwards of 120 degrees Fahrenheit. The desert areas of the country are naturally uninhabitable due to sandstorms, but there are some "green spots" or oases where crops can grow. Mountainous areas such as the Zagros and Elburz Mountains are more temperate and livable. Tehran, the capital of Iran, is situated at the foot of the Elburz Mountains.

Iran is a country that is earthquake prone and has a special team call the Red Crescent that is sent in to aid earthquake victims. It is a land that "has many earthquakes every year," some of which "have destroyed entire villages." Not all of the land is barren and in places like the Caspian Lowlands "farmers raise rice, tea, wheat, and barley." As the producer of one-fourth of the world's oil, "oil tankers and other large ships are a common sight in Iran's waters." In this book you will also learn historical facts about Iran, you'll learn about its ethnic groups, religions, you'll get a glimpse at its historic places, you'll learn about Muslim and non-Islamic holidays and festivals, you'll learn a few words in English and Persian, you'll get to see some "fancy writing," you'll learn about their literature, family life, education, food, clothing and more!

This is a nice introductory overview of Iran, from its peoples, culture, customs to its religion and more. I liked the way many facets of the country were presented without going overboard on detail, but nicely incorporated enough detail to make it well balanced. The book was colorful, vibrant and had numerous photographs throughout the pages. There were frequent scattered sidebars and captions that were informative and added a lot to the text. Some were light such as the one on Persian Cats, while others such as the one on poets where it was stated that "The tales celebrate honesty, respect, and quick thinking," were more serious. In the back of the book there is a section of "Fast Facts," an index, a glossary, and additional recommended book and website resources.

Quill says: A good introduction to the history and people of Iran.